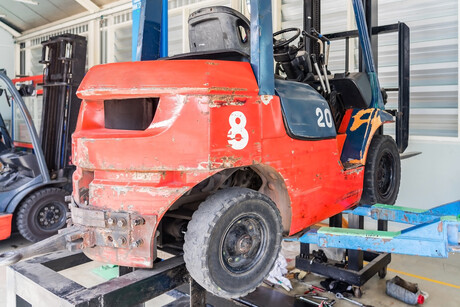 Kununurra hydraulic repair company CDM Hydraulics Pty Ltd has been fined $375,000 and its sole director, Clinton Douglas Morey, has been fined $60,000 (and ordered to pay $4456.30 in costs) over an incident that left a 19-year-old worker with serious head injuries. The company and Morey pleaded guilty to failing to provide and maintain a safe work environment and, by that failure, causing serious injury to a worker.

The company specialises in hydraulic repairs, installations and rebuilds, as well as mechanical repairs on heavy earthmoving equipment. This is done primarily on a mobile basis, with a small proportion of work carried out at the company’s premises. In October 2019, Morey and a 19-year-old worker who was on the third day of a trial to potentially become a trade assistant began to carry out work that involved removing a steering ram from a forklift. The task required accessing the underside of the forklift, but Morey did not have access to the appropriate sized hoist to lift the forklift.

Morey instructed the young worker to reverse the forklift onto a pair of loading ramps that were attached to the back of a truck, allowing access room underneath the forklift. When the worker was underneath the forklift attempting to remove the steering ram, it began to roll down the ramps and the counterweight came down on his head, causing serious and life-threatening injuries. The young worker suffered multiple fractures that resulted in permanent impairment including double vision and neck pain, problems with eating and issues with memory and processing skills.

WorkSafe Commissioner Darren Kavanagh said the incident was a good example of why good risk management procedures should be in place at all workplaces. Kavanagh said incidents involving mobile plant account for a considerable percentage of injuries in workplaces, and the manufacturer’s instructions should always be followed.

“In this case, there were ways in which Mr Morey could have gained access to the underside of the forklift and completed the work in a safe manner. The manufacturer’s instructions are to use a jack to raise the rear of the forklift and to use blocks to hold the forklift in a raised position, allowing access to the steering cylinder and ram. In this case, a simple measure such as the use of wheel chocks would have reduced the likelihood of the forklift rolling and the young man suffering these devastating and permanent injuries. The Magistrate said it was inexplicable not to use external restraints, and that the mitigating steps that could have been taken were breathtakingly simple and easy,” Kavanagh said.

Vehicles such as forklifts should always be secured in place when carrying out maintenance or repair work, using external restraints such as wheel chocks, tie-down straps or a secure winch rope.

“This young worker’s life will never be the same because of the injuries he sustained, so the case should serve as a clear reminder to employers to ensure that every possible measure is taken to keep workplaces safe,” Kavanagh said.