Anyone doubting the effectiveness of interlocks as a means of reducing drink driving should consider data stored and correlated from installed Dräger Interlock XT. It has been reported by the company that the data reveals it prevented 37,225 drink driving incidents in 2012.

The figures were compiled using data from the devices used by convicted drink drivers who were subject to the interlock program and had been unable to start their vehicles because they were under the influence of alcohol.

The good news is that over 37,000 drink driving situations were avoided. The bad news is that unless they are fitted, interlocks cannot help to curb the problem of the ‘first offender’. According to US research involving anonymous convicted drink drive offenders, first offenders are rarely what the name implies. Instead, they are usually multiple offenders who have only just been caught.

As an approved supplier of interlocks in Australia and New Zealand, Draeger Safety Pacific is currently running a new safety campaign to highlight the thought-provoking “Drink or Drive - make a clear choice” message.  Featuring a bottle opener, a car key and an interlock, the message is designed to curb the drink drive problem by helping drivers to realise that they do have a choice when it comes to drinking alcohol and getting behind the wheel of a car. 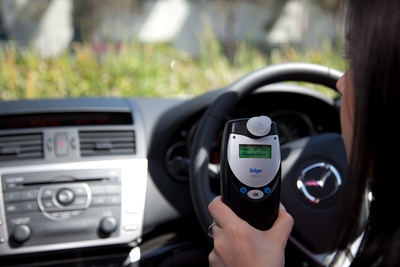 While it is often installed on private vehicles as the result of a court order following a serious drink driving offence, the Dräger Interlock XT can be fitted to company vehicles as part of an employer’s health and safety at work policy.  Eliminating the risks associated with drink driving, it helps organisations ensure that they are doing everything they reasonably can to prevent an accident or incident resulting from the actions of an employee.

Fitted to the car’s ignition, the device measures the driver’s breath alcohol level. The driver simply blows into the device as directed by the straightforward user menu. The car will not start until an alcohol level that is within the preset limit is received.

Any attempt to tamper with the device is recorded automatically and the driver must repeat the test at random intervals throughout the journey to ensure that he or she is still sober. If they fail to carry out the requested breath test sample or the test is positive for breath alcohol, an alarm will sound or the vehicle’s hazard lights and horn will be activated until the vehicle is turned off or the driver carries out a successful re-test.

Internal data storage records events such as dates, times, submission of or refusal to submit a breath sample, the measured alcohol concentration, the number of engine starts and stops, and any electrical bypassing or other attempts to tamper with the device. For those drivers who have been convicted of drink driving, this data can be presented to the driver vehicle licensing authority or other supervisory body to confirm a driver’s compliance.