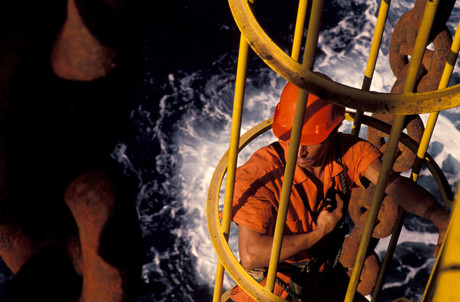 The latest annual reporting data from the National Offshore Petroleum Safety and Environmental Management Authority (NOPSEMA) confirms that in 2019, for the seventh consecutive year, the offshore petroleum operations industry achieved a zero worker fatalities result. Dr JOSEPH BRENNAN catches up with NOPSEMA’s Head of Safety and Integrity, Derrick O’Keefe, to learn more about the sector and its record; as well as to gain insight into the authority’s key strategies for the coming decade and areas of focus that other high-hazard industries should have in sight.

Offshore petroleum operations represent a high-hazard industry. Workers in this industry face a range of safety and health hazards. These include the physical hazards caused by noise, vibration and exposure to radiation and thermal extremes, as well as the challenges associated with working at height and complexities of drops in the often-unpredictable locales that offshore workers operate in. Health hazards associated with offshore work include food poisoning outbreaks and airborne illnesses that can spread rapidly through ventilation systems, as well as the dangers associated with Legionella contamination of water pipes in showers. Additionally, the precise, large-scale nature of petroleum operations means that a significant breach of safety in this industry could lead to a major accident event with catastrophic national and even global consequences.

Derrick O’Keefe is Head of Safety and Integrity at the National Offshore Petroleum Safety and Environmental Management Authority (NOPSEMA) — the sole regulator for petroleum activities in Commonwealth waters — and is all too aware of the critical role of safety in his sector. “International incidents such as the United Kingdom’s Piper Alpha disaster in 1988 and the Macondo blowout of 2010 in the Gulf of Mexico,” O’Keefe explained, “are stark reminders of the risks involved and the potential impacts of operations on the health and safety of workers and the environment.” The high-hazard nature of this industry makes Australia’s zero fatalities record for seven consecutive years especially commendable.

“The offshore oil and gas sector is recognised as a high-hazard industry and subject to stringent Commonwealth legislation and regulations designed to reduce the impacts of activities to an acceptable level,” O’Keefe said. Regarding the authority’s safety role, he goes on to explain: “NOPSEMA operates within an objective-based regulatory regime set by the Australian Government to assess activities for their potential impact on safety, well integrity and the environment. Industry must clearly demonstrate how a duty holder will undertake a proposed activity to protect the health and safety of offshore workers and the integrity of wells while reducing environmental impacts.

“For any offshore petroleum activity to commence, a proponent must first submit relevant risk management plans to NOPSEMA for assessment and acceptance. Risk management plans include safety cases, well operations management plans, offshore project proposals and environment plans. Plans are assessed by NOPSEMA’s teams of technical and scientific experts against criteria set out in the Offshore Petroleum Greenhouse Gas Storage Act 2006 (OPGGS Act) and associated regulations.” A key focus of the authority is on the prevention of “major accident events including loss of well control and the improvement of incident response and preparedness arrangements”. Further, the authority assesses “individual activity proposals to ensure risks are as low as reasonably practicable and the impact is acceptable”.

In NOPSEMA’s 2018 report it is noted that “for the sixth consecutive year there were no fatalities” and that “industry largely maintained its performance protecting workers and the environment”. 2019, too, achieved zero fatalities across the sector. This means that during the 2010s, nine out of 10 years achieved zero fatalities. The last recorded fatalities were in 2012 with two (on the Stena Clyde drilling rig in Bass Strait) and 2008 prior to that, with one (of a worker onboard the vessel Karratha Spirit). The number of major injuries (requiring more than three days’ recovery) were eight in 2018 (up from four in 2017), however declined to two in 2019, well below the highs of 12 recorded in 2008 and 2009.

There are seven mobile offshore drilling units, 19 vessels and 910 wells operating in Commonwealth waters. In 2017, the total recordable injury frequency rate per million hours worked was 1.67, approximately 7% higher than 2016. NOPSEMA also notes that there were 386 dangerous occurrences reported by operators in 2018, which constitutes a 33% increase on 2017’s figure of 291. A total of 659 domestic commercial vessel incidents were reported to the Australian Maritime Safety Authority in 2019, 79 of which were categorised as serious.

NOPSEMA has also recorded that industry activity is on the rise; in 2018 there were 16.9 million hours worked, up from 12.8 million in 2017 — a notable 31% increase. When asked to outline NOPSEMA’s strategy for maintaining its safety performance into the 2020s, especially as the sector’s activity increases, O’Keefe said: “NOPSEMA takes proactive steps to encourage and enforce preventative actions by the industry to reduce the risks of major accidents occurring. These steps include the sharing of lessons learned to ensure that safety hazards identified on individual facilities can be effectively managed across the industry.”

Ageing infrastructure was one area O’Keefe identified as a key hazard of offshore petroleum operations that is also faced by other high-hazard sectors, such as mining. O’Keefe notes that maintenance practices are essential to addressing such a hazard and ensuring that safety risks are managed appropriately. “NOPSEMA has uncovered a number of cases where audit and maintenance regimes of ageing assets have not been undertaken in accordance with relevant standards or accepted permissioning documents,” O’Keefe said.

“As a result, NOPSEMA has undertaken enforcement action against operators of facilities which have failed to properly maintain ageing infrastructure. Specifically, the acquisition of late-life petroleum assets presents a range of issues and risks associated with pressures to reduce costs when production declines at the end of field life. These pressures can have an impact on the maintenance of infrastructure and equipment, resulting in increasing threats to facility integrity and safety. To ensure safety standards are maintained as facilities approach late-life, NOPSEMA recognises the importance of regulatory engagement and holding duty holders to account for planning and undertaking decommissioning practices.”

A key takeaway of NOPSEMA’s protection of its zero fatalities record stems from its recognition of the industry’s high-hazard status, and the presence of “stringent Commonwealth legislation and regulations designed to reduce the impacts of activities to an acceptable level”. In short, the NOPSEMA case demonstrates the benefits of a sector sending a clear safety message that is backed by stringent legislation and regulation. In other words, the message has been received across our seas that: “Oil and gas companies must demonstrate that they are complying with legislation and associated regulations and implementing appropriate measures and controls to protect the health and safety of workers and the environment.”

The eight serious injuries reported in 2018 were as a result of slips, trips and falls, and pinch-point hazards. In particular, falls from height constitute a key risk for offshore workers, as was noted in NOPSEMA’s 2015 annual performance report. From the 195 inspections conducted that year, ‘fall from height’ was identified as one of three chief risk contributors for offshore workers — together with noise management and electrocution. System failures such as a risk assessment not being conducted as part of changes to a maintenance strategy for working at height equipment and inconsistencies in standards and procedures were reported as the key contributing factors for failure to mitigate this risk (accounting for 78% of identified failures). This was followed by equipment and people failures, both at 11%. Equipment failures included self-closing gates not being installed on fixed vertical ladders and walkway corrosion issues, while people failures included deficiencies in the competencies of those who were authorised to sign off on working from height permits.

85% of firms using webinars during COVID-19