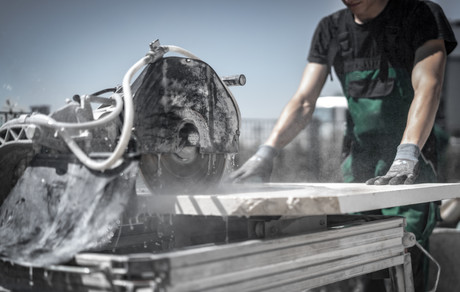 Strengthening awareness about the different kinds of diseases caused by silica dust exposure has been one of the priorities of the Victorian Government’s compliance and enforcement blitz in the latter half of 2019. Lawyer CLAIRE SETCHES responds to recent action to ban dry cutting of stone, and outlines what her firm is doing in the fight against silicosis.

Raising awareness about lung health was among the issues discussed at WorkSafe Victoria’s 2019 Silicosis Summit for medical professionals. Research into the deadly lung disease silicosis and a strong awareness campaign to highlight the risks of working with engineered stone was discussed at the summit by expert speakers including occupational physician and Fellow of the Royal Australian College of Physicians (RACP) Dr Graeme Edwards and respiratory specialist Dr Ryan Hoy. While there is now a stronger focus on lung health and awareness of dust disease among the health community, lung health needs to be more of a priority for Australian workers.

A greater awareness of occupational lung disease hazards is needed. Lung Foundation Australia (LFA) presented at WorkSafe Victoria’s summit in August 2019 on how a collective approach from organisations, government and the medical community is needed to improve lung health and reduce the impact of occupational lung disease for Australians. LFA presented on adapting the successes of their existing awareness campaigns, prevention, early detection and management of silicosis at individual, community, industry and government levels to silica.

Crystalline silica has been present in bricks and concrete in Australia for decades, but in the past 18 years has been found in extremely high concentrations in materials, such as artificial stone-top benchtops. The Victorian Government has been incredibly responsive in banning uncontrolled dry cutting in August 2019, providing free health screenings for Victoria’s 1400 stonemasons, holding information sessions and putting in place a tough new compliance code for businesses working with silica.

The Queensland Government also banned dry cutting of engineered stone in the state in September 2018 and announced Australia’s first Code of Practice for the stone benchtop industry in September 2019. It applies to all fabrication or processing, including during installation, maintenance and removal, of engineered and natural stone benchtops. WorkCover Queensland has funded an initial health screen for more than 1000 current and former engineered stone workers. They have been monitoring occupational dust diseases through a state register since July 2019. They have also held state-wide information sessions promoting the code and raising awareness of the health risks. They are also beginning work on a silica dust code for the construction industry.

In New South Wales (NSW), as well as other states and territories, the response has been far too slow. The NSW Government has not yet offered free screenings to all stonemasons, and has said they would only offer free first round screenings to those working for employers with less than 30 employees. Slater and Gordon provided evidence to the NSW Parliament Standing Committee into the 2019 Review of the functioning of the Dust Diseases Care Scheme, on behalf of the Australian Lawyers Alliance (ALA), to address their lack of action. The issues that were discussed during the review included the cost of providing scans, improving diagnostic tools for scans that provide more accurate results and putting systems in place to support transitioning the workers to other industries. The federal government has developed a National Taskforce and has announced a National Dust Diseases Register is on the way. The federal government also announced a new level of dust exposure — 0.05 mg/m3 over an eight-hour day, reduced from 0.1 mg/m3. It will be enforced in 2022.

Silicosis is a disease which is identified by inflammation and scarring in the upper part of the lungs. It is an industrial disease that was prevalent in the 1700s that we thought had been eradicated. It was quite unusual to be seeing it, especially in young people. It is a potentially fatal disease, with no cure. Life for people diagnosed with silicosis is very scary and uncertain. To have young stonemasons who were developing nodules on their lungs after a short period of time raised alarm bells. About three years ago, we began to realise it was a much larger problem. I joined forces with Dr Hoy to lobby, together with the Victorian Trades Hall Council and the Construction, Forestry, Maritime, Mining and Energy Union (CFMMEU), state government MPs, regulatory bodies and state government departments, for a change in work practices and to bring the silicosis epidemic to their attention.

In 2019, Slater and Gordon launched an investigation into a class action against the manufacturers of popular kitchen and bathroom stone benchtops, after the products led to thousands of stonemasons being exposed to the dust with a significant number contracting the potentially fatal lung disease, silicosis. We were the first law firm to establish a National Asbestos Register for Australians as well as a National Silicosis Register for people to register their exposure to silica dust.

Silicosis — like asbestos-related diseases such as mesothelioma, asbestosis and lung cancer — is a condition that develops following the exposure/inhalation of dust particles, which if left undisturbed are perfectly safe. The disease is diagnosed through examining CT scan and X-ray results showing lung damage and by performing a lung function test. Symptoms include phlegm build-up, chest pain and breathing difficulties with more acute cases presenting with fever, weight loss and fatigue. The workers I have spoken to are devastated. A lot of them are only in their 20s and 30s, some have families and many of them can no longer work. They do not have access to sick leave as they are either on contracts or self-employed. Compounding their stress, no-one can tell them how quickly the disease will progress or what their future holds.

While it will never compensate for the incredible toll this disease takes, diagnosed workers and their families may be entitled to compensation through superannuation, insurance policies and workers’ compensation schemes and potentially the Slater and Gordon Class Action. I am just thrilled we have State Labor Governments putting Queensland and Victorian workers and their health first. They listened and recognised the problem and now their action will help save thousands of lives. Workers have a right to be protected at work and their families have a right to expect them to be.

Claire Setches is a Principal Lawyer at Slater and Gordon.

In 2019, for the seventh consecutive year, the offshore petroleum operations industry achieved a...

Power maintenance must continue despite COVID-19