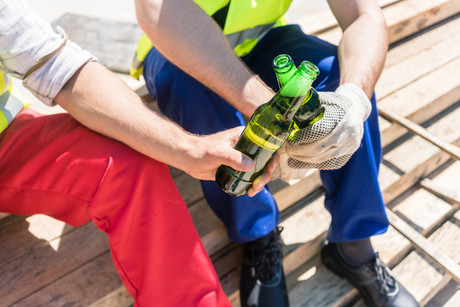 A 2020 study of more than 500 New South Wales (NSW) male construction workers has found that one in six workers reported workmates being visibly affected by alcohol on building sites. Instances of risky drinking were also found to be higher than the national average, particularly for younger (under 25 years old) and middle-aged (45- to 54-year-old) workers. The study’s findings together with the looming economic downturn — brought on by the coronavirus pandemic — has led drug and alcohol experts to call for more reduction measures to combat risky drinking behaviour in the construction sector.

“Clearly there remains a big need for appropriate workplace policy and programs to address risky alcohol use in this male-dominated industry, particularly in these two age groups,” Professor Ann M Roche, Director of the National Centre for Education and Training on Addiction (NCETA) at Flinders University and lead author on the study, said. “Changes to these cultural norms need to target workplaces at both an individual and organisational level.” Male-dominated industries are more susceptible to risky alcohol consumption and its associated harms, research has shown, with this particular study setting out to investigate the “patterns, prevalence and predictors of risky drinking among construction workers”.

In total, 511 male construction workers completed a survey designed around alcohol-related measures that included the ‘Alcohol Use Disorders Identification Test — Concise (AUDIT-C)’. Perception of alcohol-related risks to workplace safety as well as factors such as alcohol knowledge and general health were identified as key predictors of risky drinking in the study. Among middle-aged workers in particular, the study found that risky alcohol consumption reflected midlife pressures, demanding work roles and emerging mental health or age-related health issues such as high blood pressure, weight gain or diabetes.

“Mid-life is the peak age for alcohol-related deaths and the time when work-related performance/pressure is often greatest. Heavy drinking in this age group can result in disability or premature death, resulting in personal and substantial business losses,” Professor Roche said. Findings also indicated that downsizing with downturns in construction cycles also contributed to workplace stresses. Respondents were questioned about their perception of risky drinking, risk to workplace safety, quality of life and general health, and workplace attitudes to excessive alcohol consumption. The research was supported by NSW Health and the Australian Government Department of Health, with input from the building trades and Group Drug and Alcohol Program, Sydney.

The Australian research team — Ann M Roche, Janine Chapman, Vinita Duraisingam, Brooke Phillips, Jim Finnane, Ken Pidd — responsible for the study are all affiliated with NCETA. “These findings provide useful insights into the patterns and predictors of risky drinking in construction and can inform future preventive programs and interventions in high-risk workplaces,” the researchers said. “In addition to tailoring programs to both young and mid-aged workers, this work highlights the importance of implementing strategies to increase awareness of risks to workplace safety; and the adoption of norms that inhibit the social acceptability of risky drinking behaviour in the wider workplace.”

The study, titled ‘Construction workers’ alcohol use, knowledge, perceptions of risk and workplace norms’, was published online ahead of print in April 2020 in the journal Drug and Alcohol Review.