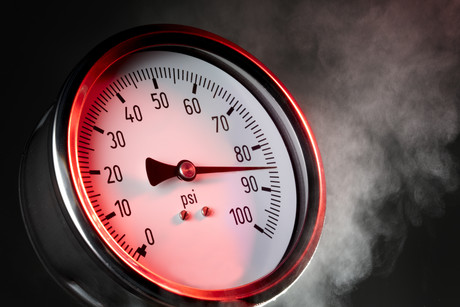 Several injuries caused by high-pressure fluid releases have recently been reported to the NSW Resources Regulator.

Each of the incidents took place while experienced contract maintenance workers in the mining industry were undertaking work on hydraulic systems.

In one case, a contract maintenance worker was struck in the face by high-pressure fluid. The incident occurred while he was performing live hydraulic pressure testing to obtain pressure decay data from a hydraulic hoist on a large haul truck. The fitting connecting the hydraulic hose to the test meter released fluid under pressure, resulting in the injury.

During a separate incident, a worker sustained injuries to his chest during a longwall changeout. When he loosened retaining bolts on the double check valve on a roof support leg, the stored pressured released. A subsequent inspection found that while the gauge was operational, its cover was cracked and three out of 680 pressure gauges on the longwall face were incorrectly indicating zero pressure.

In another instance, a worker was struck in the face and body during the disassembly of a large excavator base pod. Other workers had previously confirmed the isolation but had failed to identify an accumulator holding stored pressure. High-pressure fluid was released when the worker disconnected the hose.

According to the NSW Resources Regulator, a hierarchy of controls to reduce work exposure to high-pressure fluid was not effectively applied in these instances. Such a hierarchy is intended to provide a PCBU with guidance on minimising injury risks.

The use of isolation barriers is designed to disperse, deflect and diffuse fluids when an unintended release occurs, but the regulator said this had also not been effectively applied. It recommends that isolation barriers could include temporary movable protective coverings and shielding devices that are located between the worker and the pressurised equipment during the task. In addition, personal protection barriers could include pressure-resistant wearable clothing to protect limbs, body and neck, and full face-covering devices.

Construction jobseekers in Western Australia are being misled by a training provider that offers...

The NSW Government has released its plan to provide a safe public transport network amid...

As businesses reopen in South Australia, SafeWork SA will be contacting employers via phone to...