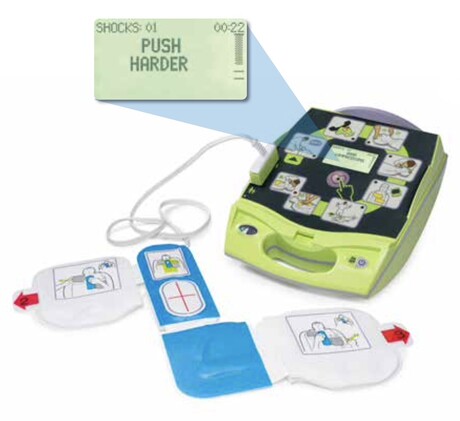 “Are you feeling ok?” As she passed through the gaming room, Amy-Leigh Williams overheard one of the guests at Panania Diggers ask this of another. Recognising the level of concern in the guest’s voice, Amy-Leigh’s instincts told her to grab the automated external defibrillator (AED) from the reception area.

Amy-Leigh is an employee at Panania Diggers, a Returned Services League club in Panania, Australia. Luckily, Panania Diggers has an AED device on site for such emergencies and, thankfully, Amy-Leigh had the foresight to retrieve it because it ultimately helped save Barry Clarke’s life.

Upon her return, as Barry sat with his wife Lyn, he suddenly went rigid and slipped from his chair to the floor. Amy-Leigh quickly checked for Barry’s pulse and when she couldn’t find one, she immediately began administering cardiopulmonary resuscitation (CPR). Her colleague, Tania Moon, called emergency services and then opened the ZOLL AED Plus®. It appeared Barry was in sudden cardiac arrest (SCA); Amy-Leigh and Tania followed the instructions to connect him to the electrodes. The device analysed his heart rhythm and administered a shock. The AED instructed Amy-Leigh to continue compressions, but she quickly noticed that it was telling her she wasn’t pressing hard enough. “The AED tells you how well you’re doing. Without that [feedback], what I was doing wouldn’t have done [Barry] any good,” Amy-Leigh says. “It was telling me to push harder, so I used my body weight.” The AED feedback indicated that her compressions were then in the target range. She and Tania continued giving compressions and the device delivered two more defibrillating shocks to help Barry’s heart regain a normal rhythm.

After the third shock, medics were on site. They worked on Barry for 45 minutes and eventually transferred him to the hospital, where he regained consciousness four days later. He was fitted with a pacemaker and defibrillator and was released after three weeks’ time. He has no recollection of the SCA but is immensely grateful for the quick thinking of Amy-Leigh, Tania, and the other attendants at the club for saving his life. If that AED hadn’t been readily accessible, his outcome may have been very different.

Just a week before Barry’s SCA, Amy-Leigh had no idea where the AED was located. Previously kept in an office, management thought that the AED should be stored in Reception so that anyone could access it. “We were so lucky that they moved it, or we wouldn’t have had the results we did,” she says. Amy-Leigh found the experience confronting. She’s only ever held a CPR certification and had no formal medical training. Only managers and supervisors receive basic first aid as part of workplace safety training. She was grateful that the ZOLL AED did such a great job guiding her and her colleagues to do exactly what Barry needed for a positive outcome, making them unexpected rescuers.

Focused on innovation and quality, ATG designs, develops, and manufactures gloves that have the...

When it comes to safety workwear and safety clothing for the building and construction industry...

The barrier to the effectiveness of wearables lies in the name.