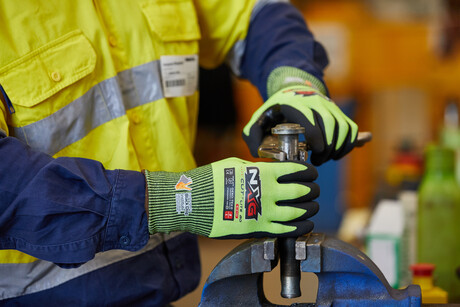 A new Australian standard for gloves was published in December 2020; a hand protection expert explains why this is a game changer for gloves, the testing and the reduction of hand injuries.

Choosing the right safety gloves for your particular task is vital to ensure proper protection. Throughout most of the world, safety gloves are rated using the European Standard EN388, to determine their level of protection. The standard consists of a series of tests to assess gloves for their ability to withstand abrasion, cutting by a blade, tearing and puncture. The gloves are then rated based on the result.

The ‘Coup cut test’ for the old EN388:2003 standard was conducted with a rotating blade, like a pizza cutter, under a standard weight with the glove material laid out on a flat surface. The blade was moved back and forth over the material until a cut was detected, and the safety level determined by the number of times the blade passed across. However, the rise of new cut-resistant fibre technology has uncovered limitations in the Coup test. Certain glove fibres would dull the blade in the Coup test and attain a cut level which may not have been representative of the actual protection level. A new cut-level test was needed to reflect the true cut level more accurately.

A cut test above the rest

The new standard, EN388:2016, was updated in November 2016 to apply a new test, ISO 13997, to the existing mechanical hazards performance tests. This upgrades the standard to be more relevant to modern real-life applications and fabrics. Now, Australian standards are catching up. The new standard was published in December 2020 and key features include:

The new cut test is a game changer for safety gloves. It will more accurately rate protection where there is a higher risk of cut injuries. This means that gloves previously rated at level 5 may only give low to medium protection based on the new cut test (TDM-100). The new cut test method was adopted from the ISO 13997 standard to overcome those limitations. The new cut test is carried out using an instrument called a TDM100 machine. The material is placed on a convex surface and a straight blade is moved across the sample under specified loads until the blade cuts through. When it comes into contact with a conductive copper strip underneath the sample, the test automatically halts. The distance between the point of initial contact and the cut-through point is measured in millimetres. The cut resistance is calculated as a ratio of the distance the blade travels and the weight of the load. The tests are carried out five times with each load weight, using a fresh blade each time to ensure accuracy.

How will safety glove markings change?

Safety glove markings will be updated to include the results of the new ISO 13997 cut test. The current 4 performance values shown under the EN388 ‘Hammer Shield’ icon indicating Abrasion, Cut (Coup test), Tear and Puncture will remain. However, should the material dull the blade under the Coup test, the second digit will get an “X” and will be tested under the ISO 13997 cut test. A letter (A–F) showing the result of the new cut test will be added to the right-hand side of the current 4 digits. A indicates the lowest rating with F being the highest rating. A new Impact protection result may also be added to the markings for gloves tested for back-of-hand protection. This will be indicated with a P (pass), F (fail) or X (not tested). 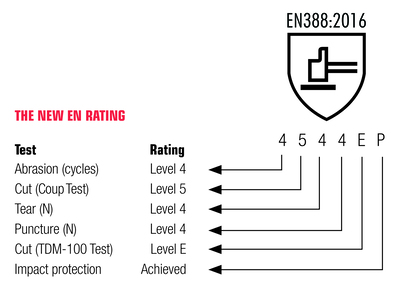 Testing under the AS/NZS 2161.3:2020 (EN388:2016) standard allows for a more accurate grading, particularly for cut resistance. This will enable choosing the most appropriate gloves to match the risks of worker activity.

Safety Mate has always been serious about preventing hand injuries. That’s why they brought a new standard of glove to the Australian market.

The NXG range of cut-resistant gloves already meets AS/NZS 2161.3:2020 and includes 8 Cut Level D glove styles, and 3 Cut Level F styles. They are ready to assist with risk assessment and hand protection user trials to ensure your workforce are protected. Contact us to discuss the new standards and to arrange a free site glove audit and trials.

For your organisation's strategic and well-considered way forward, cloud-based software such...

3M makes products that are designed to combine and give protection against a range of hazards...

While on a work site, you should never be more than a three-minute round trip from an AED to...