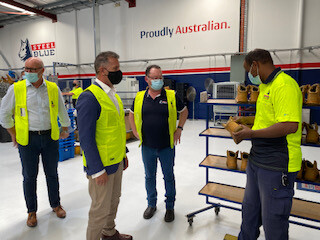 Australian safety boot manufacturer, Steel Blue, welcomed the Honourable Paul Papalia, Minister for Police, Road Safety, Defence Industry, and Veterans Issues, to tour its Malaga manufacturing facility on 25 January 2022. Steel Blue has been the manufacturer of the non-combat maintenance boot worn by the National Defence Force for the past eight years.

Steel Blue Chief Sales Officer and Founding Director Ross Fitzgerald noted that the company invested $2 million to upgrade its local manufacturing capability in Western Australia, which predominantly makes boots for defence contracts and local businesses. Since then, the company has seen revenue growth rates of approximately 20% in the last 12 months, with growth in its defence and emergency services contract portfolio. “It was a pleasure to host Minister Papalia and take him on a tour of our Malaga head office, warehouse and manufacturing facility,” Fitzgerald said.