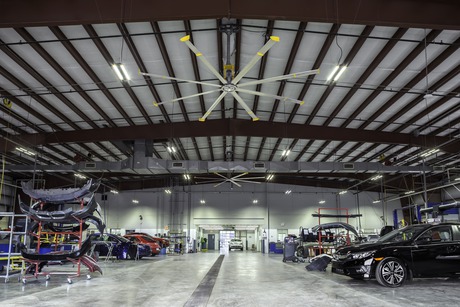 Industrial environments present a unique set of challenges for the people who work in them. Factories, warehouses and distribution centres are frequently plagued by hot, stagnant air. In regions of high humidity, condensation can also be a problem, especially in areas such as loading docks, often creating standing water on concrete floors. Performing physically demanding tasks day in and day out under these conditions, workers are not only less productive, their health and safety are also often put at risk.

One simple, cost-effective solution can be the installation of one or more high-volume, low-speed (HVLS) industrial ceiling fans. The airflow created by such fans can have a huge impact on worker safety as well as comfort. The fans can improve air quality through constant circulation and create a significant cooling effect where air con is not an option. Facilities with air con can benefit from large-diameter fans as well, because they work in tandem with the system and allow the thermostat setpoint to be raised several degrees. This can also result in energy savings.

BlueScope Buildings has installed HVLS fans with an eye on employees’ thermal comfort and safety. With locations on four continents, including Australia, the company fabricates long-bay trusses and other parts from hot-rolled steel at its 26,000 m2 US plant in Laurinburg, North Carolina. In the long Carolina summers, workers coped with stifling conditions as temperatures outdoors routinely reached 35°C and beyond. There was no air con, and floor fans provided little relief.

Plant manager David Volk had seen Big Ass Fans and had always wanted to try them out. “We had a bunch of floor fans, and frankly, they didn’t work that well,” Volk said. So when the company earmarked some money for facility improvements, Volk seized the opportunity and contacted Big Ass Fans. The company installed four 5.5m Powerfoil X2.0 fans, and Volk says he couldn’t be more pleased with the results. “Employees can tell the fans are making a difference. They feel much cooler during the long summer hours.”

Large-diameter fans are also effective at eliminating condensation problems. Moisture on the floor creates a potentially hazardous environment for employees when walking and operating machinery. Many workers compensation claims are attributed to falls on slick floors, and such accidents are also a leading cause of occupational injuries. Large HVLS fans have a proven record of dramatically speeding up drying times when moisture forms. In fact, one company tested the effect of a Big Ass Fan on drying times in neighbouring bays. Boyd Metals in America had frequent condensation problems because of trucks delivering materials from different climates, so at its Fort Smith, Arkansas, facility, it put a fan in one of two adjacent bays. In the bay with a fan, the drying time was four hours. The one without took a day and a half to dry.

Condensation can contribute to the growth of mould spores, too. The air movement provided by high-volume, low-speed fans prevents the build-up of moisture on surfaces that might harbour mould by continually keeping the air moving around machinery and inventory and reaching every corner of a space.

Foodmach joins the fight against COVID-19

No shortage of Easter eggs this year