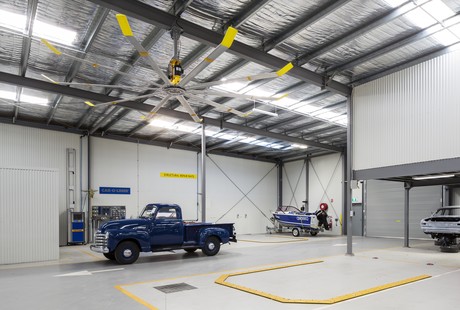 Heat stress is Australia’s most fatal natural disaster, killing more people than all other natural disasters combined. According to the Centers for Disease Control and Prevention, extreme heat can cause heat stroke, heat exhaustion, heat cramps, permanent disability and even death. In the workplace, heat also increases the risk of injuries as heat can easily cause fogged-up safety glasses, sweaty palms and dizziness. Workers who are disorientated from the heat are much more likely to have accidents in the workplace.

Safe Work Australia states that controlling risks associated with extreme temperatures is a legal obligation for companies to ensure a safe working environment for their employees.

How do we beat the extreme heat that we’re often faced with here in Australia? The CDC puts “Increase air velocity” at the top of its list of recommendations for how to combat heat and avoid the serious problems it can cause.

Bissell’s Paint & Panel shop in the sunshine state of Queensland has done just that with help from Big Ass Fans. Bissell’s owner, Kip Kippen, recognised the need for serious air movement in his new purpose-built facility to keep his autobody repair centre safe and comfortable, even during periods of soaring Queensland temperatures.

Feeling was believing for Kip. He decided Big Ass Fans were the best solution for his space after seeing a large-diameter Big Ass Fan in person and feeling the airflow for himself. “Feeling the total air movement from a Big Ass Fan was way better than other fans I’d seen,” says Kip. “Normal fans create directional movement, whereas the Big Ass Fan provided massive air movement that was cooling the entire shop and making the temperature feel much cooler.” He also liked how the low speed of the Big Ass Fan meant he wouldn’t have to worry about dust blowing everywhere from too much of a breeze. “It’s amazing how well the fans work without blowing stuff everywhere.”

After reviewing architectural plans for Bissell’s Paint & Panel’s large facility, Big Ass Fans provided a custom solution of two Powerfoil X2.0 fans and one Isis ceiling fan for the new auto centre. Kip appreciates being able to rest assured his workers are safe and also more productive, thanks to Big Ass Fans and the fact they can make a person feel up to 6°C cooler. “Comfortable workers make the best workers as they aren’t having to constantly stress about the heat or deal with annoying paint fumes,” says Kip. “We like to have air circulation at all times, so we keep the fans on year round and don’t ever get the build-up of fumes that most auto shops have. You know you’re doing something right when your employees frequently comment on being thankful for the fans.”

Kip also decided to incorporate 13 high bay Big Ass Light LEDs into his facility in efforts to make his new shop as energy efficient as possible. “Big Ass Lights had the best built quality with great output and low energy use, so we chose to add them too,” says Kip. He notes they needed the most light possible to identify any defects before and after their auto repairs. “The LEDs guarantee we are providing top quality service, as we can notice any little defect or issue needing rectification.” And his employees are relieved it’s now much easier to see everything clearly.

Even though Bissell’s Paint & Panel’s new facility is much larger with significantly better airflow and lighting, Kip says his power bills aren’t any higher than they were before at his old auto shop.

Kip would recommend Big Ass Fans and Big Ass Light LEDs to anyone wanting a safe and comfortable working environment. “Both the fans and lights do what they’re meant to. They’re a definite cure to the two main problems most industrial facilities face — air movement and lighting.”