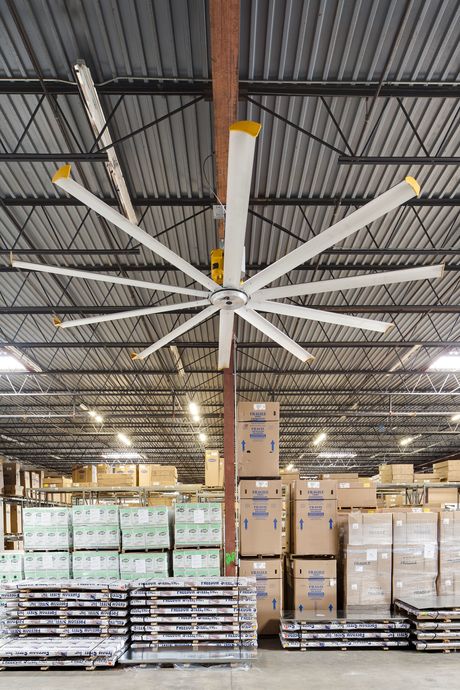 Employees in industrial settings such as factories and distribution centres are often forced to work in conditions that are hot, uncomfortable and sometimes downright unhealthy. Air conditioning can sometimes be out of the question because of the sheer size of these types of facilities and the associated expense. Therefore, excessive temperatures, along with stagnant air, are frequently the norm and as a result workers can be not only put at risk but also be less productive.

Fortunately, for management and employees alike, the airflow pattern of an energy-efficient, high-volume low-speed (HVLS) industrial ceiling fan can have an impact on the safety and comfort of workers. Where air conditioning is not an option, the fan improves air quality and creates a significant cooling effect. And in facilities that do have air conditioning, it can work in tandem with the system to create greater energy savings by allowing the thermostat setpoint to be raised several degrees.

Employees at the Marathon Petroleum receiving warehouse in the US can attest to the difference a large-diameter ceiling fan makes in the workplace. Previously, they had to contend with stifling heat during humid summer days. “Basically, it was like sitting in an oven,” described warehouse foreman JD Branson.

Like most such facilities, the 1200 m2 warehouse lacked air conditioning, and because of security concerns, receiving doors were open only at limited times. That meant there was very little airflow throughout the building. At the hottest times, employees resorted to wearing cooling wraps around their heads and necks to keep from overheating. Managers tried to cool the space with small misting fans, but those mostly only succeeded in making important paperwork damp. A larger fan blew papers everywhere, along with dirt and debris, and breathing was not a pleasant experience when that happened.

Marathon had heard of Big Ass Fans’ large-diameter industrial fans’ ability to circulate massive amounts of air using little energy. And they’d heard the fans were able to lower both the perceived temperature and humidity while creating only a gentle breeze. The warehouse invested in a 3.7 m Big Ass Fan, which allowed for the removal of half a dozen inefficient floor fans. The single fan produces consistent air movement that has a 5.6°C cooling effect on employees, helping them stay comfortable during the hot summer months. Marathon no longer needs multiple fans blowing in every direction. Instead, when necessary, the one ceiling fan is just turned up to high. For Marathon Petroleum Co, the Big Ass Fan has had considerable impact on employees’ comfort and safety.

The large-diameter fans also help promote workplace safety in other ways. By ensuring that air reaches all corners of an industrial space, they help eliminate condensation, which can frequently result in the growth of mould spores. The air movement provided by high-volume, low-speed fans prevents the build-up of moisture on surfaces that might harbour mould by continually keeping the air moving around machinery and inventory.

Condensation also creates a potentially hazardous environment for employees on foot. Many workers compensation claims can be attributed to employees falling on slick floors, and these accidents have been reported as a leading cause of workplace injury for people, especially between the ages of 15 and 24. Large HVLS fans can be used to speed up drying times.

Clearly, large-diameter HVLS ceiling fans such as those made by Big Ass Fans have many benefits, boosting air quality and improving worker safety and comfort year-round. And when they’re installed in an industrial setting, everybody wins, because many studies have shown that when workers are comfortable, not only are they safer — they’re also more productive.

Knowing when to give safety boots the boot

Knowing when to replace safety boots, in addition to choosing the right work boot, is the key to...

As people become more familiar with voice recognition technology in their personal lives,...

The dangers of inhaling silica dust in the construction and building sectors are very real...