There are many categories of safety garments available in the Australian marketplace, designed to protect workers in any number of ways. We can get safety garments that are ‘hi-vis’, weatherproof, thermally insulated, fire-retardant, breathable, fully sealed, heavy-weight cotton drill, and the list goes on. However, there are some common work environments where the level of protection afforded by these ‘general’ levels of protection is not enough. 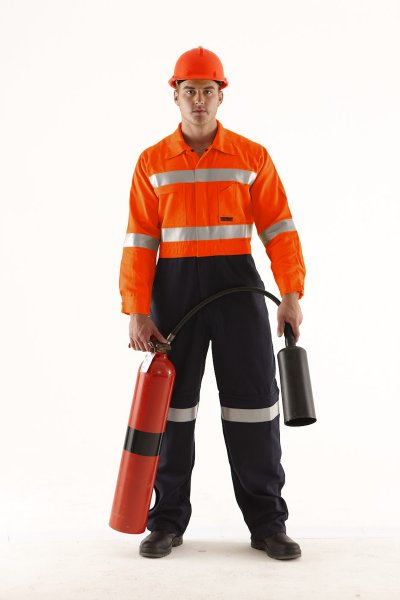 Australian Standards give businesses and workers a wealth of guidelines in the selection and qualification of personal protective equipment (PPE) such as eye protection, hearing protection, gloves, footwear and general safety apparel. While that covers the vast majority of industrial situations where workers need to be protected, there are some areas in which many Australians find themselves working, that our local standards don’t adequately cover. Specifically, we’re talking about fire retardancy in electrical and other industrial environments, as well as insect resistance in tropical and sub-tropical environments.

There are only two protective workwear fire performance standards in Australia:

These two standards act as a guide and are used within the industry to ensure fire-resistant (FR) protective clothing meets a certain minimum criteria.

While a guide to the selection of protective clothing does exist in Australia’s AS/NZS ISO 2801:2008 - this standard doesn’t provide performance guidelines. It only leads organisations through the process of risk assessment and defining the requirements of their specific protective clothing needs.

Noteworthy is the standard AS/NZS 4836:2001, which stipulates that eyewear, boots, insulated gloves, flame-resistant gloves and ear plugs or muffs should be worn; but when it comes to clothing, the standard simply recognises electrical workers should wear FR clothing, but there is no actual performance standard for the protective clothing.

According to a local subject matter expert on protective clothing - Troy Yewdall, Business Development Manager for Bisley Workwear - when it comes to FR fabrics, Europe and the US are at the forefront in terms of development and standards. He states: “The US standard for electrical safety in the workplace - NFPA 70E - was introduced back in 2000, after extensive data was analysed around electrical-fire accidents. The analysis revealed that more than 400 deaths occurred as a result of electrical accidents, and almost 80% of them were related to infections and complications received as a result of their clothing catching fire. Likewise, the European market must adhere to EN/ISO 61482 (Protective clothing against the thermal hazards of an electric arc) which provides for a similar level of fabric-performance guidance and is also widely referenced as a benchmark for this industry.

“Bisley sources most of its US FR fabrics for electrical-worker garments from Westex, the company behind Indura Ultra Soft. Westex is the world’s largest producer of durable FR cotton and cotton-blend fabrics, and throughout its 50-year history, has constantly improved its protective fabrics through R&D.

“Bisley, in conjunction with both its US and European technology partners, recognises that, in the event of an electric arc flash, flash fire, molten-metal splash or other thermal exposure, the performance of the FR fabric used to construct the garment is a critical factor in determining the level of protection the garment will afford the wearer. The FR fabric is also a main factor determining the comfort, durability and the overall value equation of an FR protective-clothing program.”

When considering the requirements of an FR clothing program, it should be noted that protection, in particular, against arc flash is paramount. When electric current passes through air between conductors, or between ungrounded and grounded conductors, the temperatures can reach 20,000°C. Exposure to these extreme temperatures both burns the skin directly and causes ignition of clothing, which adds to the burn injury. In the US alone, more than 2000 people are admitted to burn centres with severe arc-flash burns; and the majority of hospital admissions due to electrical accidents are from the arc-flash burns, not from shock.

Protecting against other fire hazards

In other industrial environments, flash fires - rapidly moving flame fronts from combustion explosions - may occur in environments where fuel and air become mixed in adequate concentrations to combust. A flash fire from such an explosion can have a heat flux of approximately 84 kW/m2 for relatively short periods of time. Workers in these environments should not only ensure that the protective garments they wear are constructed from fabrics rated to withstand these conditions, but also minimise the risk of combustion from static discharge.

Yewdall points out that Bisley has developed a new line of FR fabrics in conjunction with its European technology partners to mitigate such risks, stating: “The fabric, known as ‘negastatic drill CVC’ is a ring spun cotton/polyester/negastatic blend, incorporating a carbon thread woven into the garment at 8 mm grid pattern intervals. This effectively ensures any build up of static on the surface of the fabric spreads only as far as the next grid intersection, thereby eliminating the risk of static discharge.”

Protecting against insects and bacterial hazards

Yewdall adds that, in addition to providing protection against a broad range of thermal hazards, “development of the negastatic drill CVC FR fabric was also in response to increasing global demands for an FR-base fabric that can also incorporate additional protective treatments such as insect protection and antibacterial treatments, without any reduction in FR performance. The end result is a combination protective product suitable for large-scale oil and gas and/or various infrastructure projects located in geographical areas along the ‘malaria belt’ - Sub-Saharan Africa, South-East Asia and South America.

“Developed in response to these ‘malaria belt’ project demands for clothing that offers protection against the threat of insect-borne diseases, transmitted by mosquitoes, lice, ticks, fleas, etc, Bisley’s insect protection range caters for increasingly stringent OHS and insurance obligations set down by global corporations who are now demanding insect protection clothing be worn where the above-mentioned threats impact on employee health, wellbeing and ultimately, productivity.

“Domestically, there is also an increased focus on the health effects of working in the tropics - in particular, dengue fever - in mid- to far-north Queensland. The Queensland Department of Health currently runs a series of radio, TV and print-media educational programs to ensure the message about the potential health effects of dengue fever are understood by the general public, and how to prevent its occurrences. Bisley’s intention is to ensure workers in these environments are provided adequate garment-based protection.”

Commonly, in areas where insect-borne diseases are prevalent, there are other associated sub-tropical climate health effects such as bacterial infection and odour as a result of humidity - which can have a detrimental impact on workers. Dermatologically tested antibacterial treated fabrics are best used in protective garments in these environments because they utilise the destabilising effects of silver to break down unwanted bacteria, reducing the potential for fungi and associated bacterial-related issues.

“Furthermore, Bisley research found that, once coming into contact with an insect-protection treated garment, insects have a 100% knock-down rate. Under the NATO Standard TL8305, all approved fabrics must undergo various levels of cytotoxicity testing to ensure they are 100% safe to wear against the skin and, furthermore, comply with Oeko-Tex Standard 100.

“Insect-protection garments from Bisley also offer proven long-term effectiveness for up to 100 washes, with batch fabric testing further ensuring all garments produced can be traced back to their fabric-manufacture stage.”

Black lung does not discriminate on age

A new video uses the testimonies of coalminers in their 30s and 40s to shatter myths around black...

A guide to hospital insurance and what it covers

Caring for Aboriginal Elders in the Pilbara

Ahpra urges consumers to be safe before cosmetic surgery

Is water the solution for renewable energy storage?

Is your electrical equipment safe?