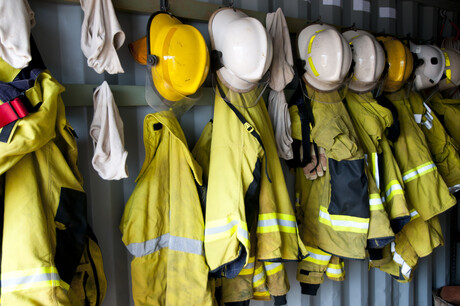 Researchers from multiple institutions in China have developed intelligent fire suits and masks, with their findings published in Nano Research. The research showed that breathable electrodes woven into fabric used in fire suits are stable at temperatures over 520ºC. At these temperatures, the fabric is found to be essentially non-combustible with high rates of thermal protection time at the maximum values recorded so far for such technology at 18.91 seconds.

The results show the efficacy and practicality of Janus graphene/polyp(p-phenylene benzobisoxazole), or PBO, woven fabric in making firefighting “smarter” with the main goal being to manufacture products on an industrial scale that are flame-retardant but also intelligent enough to warn the firefighter of increased risk while traversing the flames.

Wei Fan, professor and researcher at the School of Textile Science and Engineering at Xi’an Polytechnic University, said that conventional firefighting clothing and fire masks can ensure firemen’s safety to a certain extent. “However, the fire scene often changes quickly, sometimes making firefighters trapped in the fire for failing to judge the risks in time. At this situation, firefighters also need to be rescued,” Fan said.

The intelligent fire suits use Janus graphene/PBO; this introduction of PBO fibres offers better strength and fire protection than other similar fibres, such as Kevlar. The PBO fibres are first woven into a fabric that is then irradiated using a CO2 infrared laser. From here, the fabric becomes the Janus graphene/PBO hybrid that is the focus of the study. The mask also utilises a top and bottom layer of Janus graphene/PBO with a piezoelectric layer in between that acts as a way to convert mechanical pressures to electricity, and vice versa. 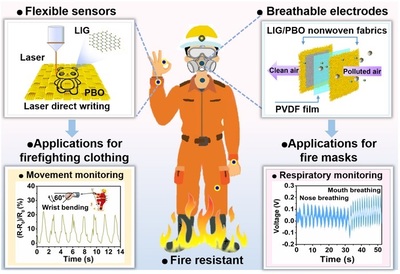 “The mask has a good smoke particle filtration effect, and the filtration efficiency of PM2.5 and PM3.0 reaches 95% and 100%, respectively. Meanwhile, the mask has good wearing comfort as its respiratory resistance (46.8 Pa) is lower than 49 Pa of commercial masks. Besides, the mask is sensitive to the speed and intensity of human breathing, which can dynamically monitor the health of the firemen,” Fan said.

Flame-retardant electronics featured in these fire suits are flexible, heat resistant, quick to make and low-cost, which could facilitate scaling for industrial production. This makes it more likely that future firefighting suits and masks will be able to effectively use this technology. Quick, effective responses can also reduce economic losses attributed to fires.

“The graphene/PBO woven fabrics-based sensors exhibit good repeatability and stability in human motion monitoring and NO2 gas detection, the main toxic gas in fires, which can be applied to firefighting suits to help firefighters effectively avoiding danger,” Fan said. Being able to detect sharp increases in NO2 gas can help firefighters change course in an instant if needed and could be a lifesaving addition to firefighter gear.

Major improvements can be made in the firefighting field to better protect firefighters by utilising graphene/PBO woven and non-woven fabrics. Widescale use of this technology can also help researchers reach their goal of reducing mortality and injury for those who risk their lives fighting fires.

Hand injuries at work — what do the statistics say?

Workers in any industry or workplace can experience hand injuries — ranging from sprains...

The rise and rise of women in the construction and industrial workforce lends itself to an...

Knowing when to give safety boots the boot

Knowing when to replace safety boots, in addition to choosing the right work boot, is the key to...