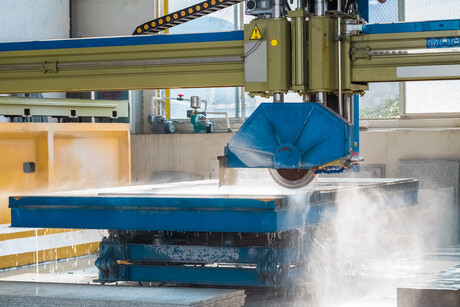 A 2020 study has documented increased incidences of silicosis, progressing rapidly to massive pulmonary fibrosis, in a large proportion of patients who had previously worked with artificial stone, also called artificial quartz agglomerate or conglomerate, a popular countertop material, despite stopping exposure after diagnosis.

Artificial stone (AS) is composed of finely crushed stone mixed with synthetic resins and has a high silica content. It emits respirable crystalline dust (RCS) while it is fabricated and in cutting, shaping and finishing in small industries, which can cause permanent and severe lung damage if it is inhaled. A 2020 study has reported on the results of follow-up exams of 106 AS workers in southern Spain who were diagnosed with silicosis or severe pulmonary fibrosis between 2009 and 2018. The link between the illnesses and AS RCS was first reported in a study published in 2014.

“While 6.6% of the AS workers were initially diagnosed with massive pulmonary fibrosis, 37.7% had more advanced disease at the follow-up exam, even though they had left their jobs and were no longer exposed to the harmful dust,” Dr Antonio León-Jiménez, the lead investigator, said. “In a quarter of the patients, the rate of decline in lung capacity progressed very rapidly.” Four years after exposure ended, the annual decrease of lung capacity appeared to slow down.

Silicosis is traditionally related to mining or quarry work, and is caused by inhaling crystalline silica dust that produces permanent lung scarring (pulmonary fibrosis). Its incidence has decreased in high-income countries following the reduction of mining activities and implementation of better protective measures for workers and dust control. Over the past decade, however, AS has increased in popularity, due to its design and attractive colours, supplanting granite and marble. Working with AS has resulted in a resurgence of cases of silicosis identified among fabricators.

Despite following protective measures used for handling natural stone, those working with this increasingly popular material were injured by the higher level of crystallised silica in AS (93%) than in natural stone (5%–30%). Water suppression and exhaust ventilation techniques have been implemented to reduce the concentration of respirable dust, but harmful levels of RCS are still documented in workplaces, generally in small factories. The investigators in this study are calling for more aggressive engineering controls and new treatments to be developed and tested.

“Avoiding the continued inhalation of silica is essential but is not enough,” Dr León-Jiménez, one of the investigators, said. “The majority of patients are young people and the progression of the disease, in a significant number of them, foreshadows an uncertain future. Our findings emphasise the need to maximise protective measures in active patients and to find new treatments that may delay or curb the progression of the disease.” Demand for engineered quartz countertops continues to increase across the world.

Although the first patients were described in Spain and Israel, the number of cases has been increasing globally. In Australia, the situation was considered an occupational epidemic in 2019, and the emergence of new cases in the United States and China indicates that this is a global problem that has likely just begun. In an accompanying editorial, Drs Robert A Cohen and Leonard H T Go cautioned: “Given the toxicity of this material and the rising human cost of its use, if engineering controls cannot limit worker exposure to hazardous concentrations of RCS, a ban on AS needs to be considered. Colourful countertops are not worth the price paid by these workers.”