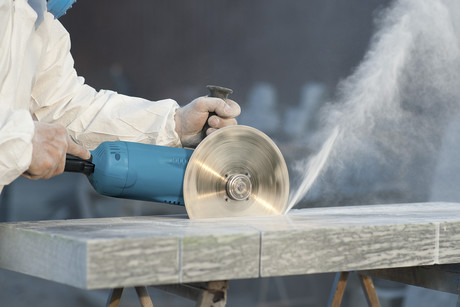 Dry cutting of engineered stone has been banned in Queensland, following health and safety concerns about high levels of silica in this product.

“Any employer engaging in dry cutting of this product must stop immediately,” Grace said.

“Enforcement action will be taken against any employer who fails to adequately protect its workers.

“Due to the high levels of silica in engineered stone which can be breathed in as dust when cut dry, it is absolutely paramount that this warning is taken seriously.

“Last night I was advised by senior officials from Workplace Health and Safety Queensland (WHSQ) and WorkCover Queensland that there has been a sudden spike in the number of confirmed cases of silicosis for workers in this industry.

“Silicosis is an aggressive form of pneumoconiosis — a debilitating respiratory disease — which can be fatal.

“To date, WorkCover Queensland has received 26 workers compensation claims for silicosis, including 22 claims lodged within the past three weeks,” she said.

“Tragically, at least six of the confirmed cases have Progressive Massive Fibrosis (PMF), which is the end stage of the disease. My heart goes out to all affected workers and their families.”

“The Queensland Government has taken an important step in reducing the impact of this substance, which can have devastating effects on a sufferer and their loved ones,” said David Agudelo, diseases lawyer with Slater and Gordon.

“Unlike other dangerous dusts such as asbestos, silica-related illness can begin to show symptoms within a couple of years consequently hitting people as early as their 20s and 30s.”

Last December and after acting for a number of people affected by the substance, Slater and Gordon launched the country’s first National Silicosis Register, which allows people to register potential exposure and assist them to access appropriate medical and financial support.

The register will also collect data and increased knowledge of the exposures that lead to the disease.

“WorkCover Queensland will fund the immediate health screening for workers, or former workers, who have been exposed to silica from engineered stone over an extended period of time,” she said.

“WHSQ will also immediately progress to the next stage of its state-wide compliance campaign, with 22 specially trained inspectors on the ground from this week, auditing all remaining engineered stone benchtop makers across the state. By the end of the year all 160 employers in Queensland will have been audited.

“An industry safety alert and comprehensive guide for industry and workers has also been released today.

“We are working towards developing the necessary explicit regulations to prohibit dry cutting of stone, along with a code of practice for the Queensland industry, which will be finalised as soon as possible.

“I have also written to the federal minister, Kelly O’Dwyer, to alert the federal government of the seriousness of this issue and the need for a national response.”

Grace said there was no need for home owners with engineered stone benchtops to be concerned, as the risk only arises when the product is cut, grinded or polished while dry.

Any worker seeking information about safe work practices or health screenings should contact 1300 362 128 or visit www.worksafe.qld.gov.au.

In NSW, the Manufactured Stone Industry Taskforce was convened by SafeWork NSW in July and will run until June 2019.

As a measure to protect local mine workforces, on 4 April the Queensland Government placed a ban...

A partnership between the Australian Government and the private health sector will provide 30,000...

Due to the recent outbreak of coronavirus, employers are required by Australian WHS laws to...