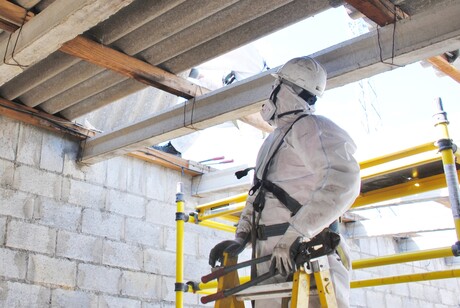 National Asbestos Awareness Week 2020 runs from 23 to 29 November. In its lead-up, Western Australian (WA) regulator WorkSafe WA is urging companies to ensure their workplace asbestos management systems are up to date, and that workers are aware of these systems. Employers are also reminded that buildings built before 1990 are likely to contain materials with asbestos content. Two recent Queensland asbestos-related incidents and subsequent fines involving inappropriate removal and licensing highlight the importance of asbestos awareness for workers and employers.

In Queensland, a specialist demolition company and its two directors have been fined $16,000 for not properly demolishing a house that had asbestos containing material (ACM). The company was found guilty of six charges under the Work Health and Safety Regulation 2011, relating to improper removal of ACM. The company was fined $8000, plus court costs of $1100, with no conviction recorded. The two company directors, who carried out the demolition works, were each fined $4000. The demolition company was contracted to remove a Toowoomba house with ACM that should have been appropriately removed prior to any demolition work; however, that did not occur. Instead, an excavator was used to demolish the dwelling and ACM was pushed into piles across the site, with limited effort made to remove the asbestos or put in control measures against inadvertent dispersal of ACM.

The excavator should not have been used to demolish the structure while it contained the ACM. The specialist company did not use ‘asbestos removal’ signage on the property perimeter, as required, to alert people about the potentially hazardous works being undertaken. Additionally, an adequate asbestos removal plan was not put in place before removal work commenced. The company also failed to inform property owners close to the site that ACM works were happening. Workplace Health and Safety Queensland (WHS Queensland) inspectors who attended the site found ACM was not adequately contained and labelled as required before its removal from the site. The defendant company was a licensed asbestos removalist and aware of the safe methods of handling and removal of asbestos; however, these methods were not followed.

Magistrate Ryan considered the defendant company’s timely plea, that it had no previous convictions for any work health and safety breach and had engaged a contractor (at its own cost) to remediate the contaminated worksite. The company was also no longer engaged in demolition or asbestos removal works and was moving towards deregistration. Both individual defendants advised the court that they had been affected financially and health-wise by the proceedings, and are no longer involved in this type of work. However, Magistrate Ryan also noted that if the rules for the safe removal of asbestos are not followed, the effects can be devastating for people who acquire a related illness, and that there was a heavy onus on all three defendants (the company and its two directors) to keep the worksite safe.

In a separate incident, a Brisbane business owner was fined $2000 for an offence that occurred in May 2019. He was the director of a company that had its asbestos removal licence cancelled in July 2018; despite this, he subsequently engaged in removing ACM from a property in Graceville. The company was contracted to do demolition work and asbestos removal on the second storey of a house. After quoting the job, the company director forwarded the relevant Form 65 to complete the asbestos removal work, indicating he was using another company’s licence.

In May 2019, the company director and another worker removed 32.89 m2 of ACM before WHS Queensland stopped them from finishing the work. Subsequent enquiries revealed that the specialist company had no licence to remove over 10 m2 of ACM, and as a worker of that business, the defendant was not authorised to do the ACM removal work. During sentencing, Magistrate Mark Nolan noted it was a serious matter to remove ACM without the appropriate licence.

Resources on asbestos safety are available here, via the Asbestos Safety and Eradication Agency website.