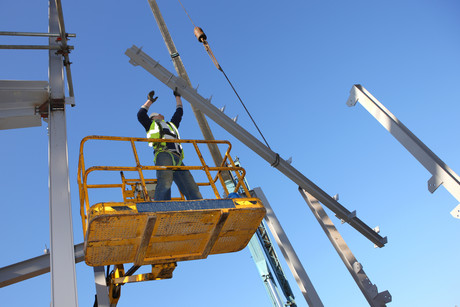 With five deaths and 721 injuries caused by falling objects at construction sites in the past five years, WorkSafe Victoria is making falling objects a focus of inspections in the coming weeks.

Falling objects are a leading cause of death and serious injury in the construction industry and pose a risk not just to workers, but to people in streets near worksites.

In January, serious incidents involving falling objects included one at Southbank, Melbourne, where a piece of timber fell 22 floors after it snapped in half while being lifted to a loading bay.

In another incident, a piece of MDF sheeting fell through an open window and 63 floors to the ground on Little Latrobe Street.

There was also an incident in which a tower crane dropped a concrete slab weighing about 11.5 tonnes at a construction site at Clayton.

No-one was injured in these incidents; however, in September last year, a 48-year-old man died and another worker was seriously injured after they were struck by a kibble full of concrete which fell from a crane at a Box Hill construction site.

Common causes for falling objects include gaps between safety screens or holes in safety netting, missing kick or toe boards on scaffolding, and debris or materials coming loose from plant while being lifted.

WorkSafe Executive Director of Health and Safety Julie Nielsen said even a small object can cause serious injuries when falling from a great height.

“Loads being lifted through the air must also be properly secured, and as we saw last year, the consequences can be tragic when a crane drops its load and there are workers below,” she said.

“Risk control measures for falling objects are well known so there is no excuse for employers failing to implement them.”

WorkSafe states that employers and site duty holders must ensure they prevent falling objects by: