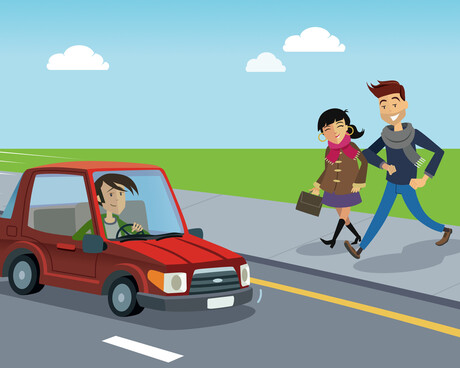 Have you ever had a crash while driving? What about a near miss, or a moment where you thought to yourself ‘oops, that wasn’t fantastic driving...’? Was it at a time when you were stressed, rushing, distracted, or otherwise just not in a great space in your life? Well, you wouldn’t be alone. The research is clear: happier people make better drivers. And on the flipside, those feeling unhappy, angry or low will likely make worse decisions behind the wheel.

It does make sense, right? If you’re the kind of person who likes an immaculate workspace, you’ll prefer a tidy vehicle. If you frequently feel disrespected at work (maybe you have an aggressive boss), then you’ll feel much more aggrieved by being cut off in traffic. The research has shown that it has a lot to do with overall life satisfaction — if you’re happier all around, you’ll take less risks on the road. If someone is an aggressive and risky driver, they’ll likely be like this in work and home life too.

Dr Robert Isler, Fleetcoach’s founder, says, “Looking into this idea came from an event that happened a few years ago when we were filming. We were shocked to witness a driver behind us, driving too closely, then overtaking us illegally and dangerously crossing two solid yellow lines. It was just by sheer luck they did not crash into the oncoming car. That really triggered our thinking about the mental state of drivers.”

On the topic of mental state, we can turn to a way of measuring wellbeing called the ‘PsyCap’ psychometric. It measures individuals’ hope, self-efficacy, resilience and optimism (which make up the nifty acronym HERO). If employees rate highly on HERO, they flourish at work, report high levels of work satisfaction and work performance, and are in turn safer drivers. So mental state is directly represented on the road.

Another explanation comes from the field of positive psychology. It’s called the Broaden and Build theory. It tells us that positive emotions broaden our mindset, while negative ones tend to close it right up. This is because when threatened, we fall back on a limited number of choices (such as fight or flight) rather than a range of positive ones.

Let’s translate this to an on-road example. Let’s say you’re behind the wheel and someone swerves towards you, leaving you feeling afraid. The fight/flight response could be to get angry, brake suddenly and react impulsively. If you were in a better and more relaxed space, you might look ahead and see the event coming, or respond to the same event with curiosity. Your thought might be ‘I wonder what’s happened there?’ with a genuine idea to learn from the occasion, and maybe even check in to see whether the other driver is okay. Positive emotions broaden our ability to see what’s going on around us, as well as increasing our tolerance of others — both obviously very helpful while on the road!

Another aspect to consider is that being in a better state of mental health allows us the bandwidth to be more compassionate towards others. Theory of Mind references the ability to attribute mental states such as beliefs, intentions, emotions, etc to others. How does this relate to driving? Having the ability and mental space to do this means that we can think that perhaps another person’s terrible driving might be due to something being wrong, rather than simply feeling angry towards them. For example, in the above story where Dr Isler observed the driver making so many mistakes, it becomes easier to think that perhaps there is another explanation. Perhaps the driver putting himself at risk in that way shows us how little self-worth he has, or how distracted by something else he must be. It helps us to at least consider being compassionate and hoping he is okay, rather than becoming angry first.

And where does stress and burnout come into all of this? Dr Isler talks about a study he was a part of where one of the most compelling results was that stress and burnout were extremely strongly correlated with the number of traffic incidents employees reported. Imagine if traffic infringements and crash risk could be lowered, simply through having happier and mentally healthier employees.

So why is all this important? Awareness. Psychology says that awareness is a key first step to making any kind of change. Awareness of your own behaviour, tendencies and state of mind, and awareness of how others might be feeling. It would be a mistake to think, ‘Well that’s too bad — I’m not happy/calm/in a good space, so my driving is destined to suffer.’ Rather, let’s think ‘if it’s as simple as adjusting my mental state, it’s worth a try’. And we’ll show you how.

Learn how you can create a better state of mind at https://www.fleetcoach.com/blog/its-just-who-i-am-i-cant-help-it.

And to find out more about how Fleetcoach connects wellbeing and driving go to https://www.fleetcoach.com/driver-training, or email contact@fleetcoach.com.

Preventative maintenance is a worthwhile investment and very effective when the costs of lost...

SICK offers its modular Eco-System for AGCs — with sensor solutions that make autonomous...