Risks of not effectively immobilising vehicles 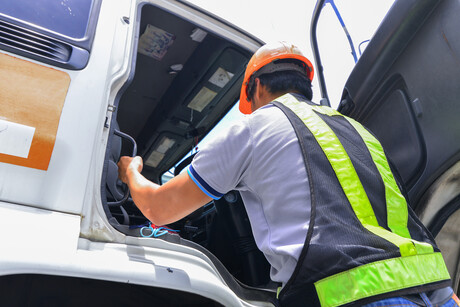 In April 2020, a man suffered serious injuries after being crushed by a frontend loader, with initial inquiries revealing that the operator got out of the cabin to untie a hay bale when the vehicle started rolling down a slope. The operator appears to have been attempting to re-enter the cabin when he was trapped between the moving plant and the gate post. However, these findings are not yet confirmed, with investigations continuing into the cause of the incident.

A number of Queensland workers have been seriously injured or killed because vehicles have not been safely immobilised while work is carried out on or around them. In May 2017, a company was fined $60,000 following the death of a worker who was run over by a truck/trailer. The worker was under the back of the trailer, checking on bouncing that had occurred while driving, when the truck/trailer began moving backwards, rolling over the worker. The worker sustained head and torso injuries, which ultimately led to his death.

In December 2016, another company was fined $60,000 following the death of a worker who was run over by a prime mover and trailer. The incident occurred after the prime mover and trailer had trouble releasing its trailer brakes. The worker went to the rear of the trailer and attempted to resolve the problem; when the vehicle began rolling backwards, the worker attempted to re-engage the maxi-brake, but was fatally struck by the trailer wheels.

From July 2014 to January 2020, there have been on average 53 workers compensation claims annually for crush-related injuries involving trucks and semitrailers. In roughly the same period, there have been 20 notified events involving someone being run over by a truck, prompting WHSQ to issue four statutory notices relating to incidents that involved a failure to manage the risk of unsafely immobilised trucks hitting people.

Duty holders must ensure trucks, trailers and mobile plant are safely immobilised when they exit these vehicles or work around them. The person conducting the business or undertaking (PCBU) must manage the risks associated with immobilising vehicles, by identifying hazards, assessing and controlling risks, and reviewing control measures to ensure they are effective. Once the risks have been assessed, the next step is to implement control measures to manage the risks associated with immobilising vehicles.

Following the hierarchy of controls, PCBUs must first aim to eliminate the hazard of a vehicle rolling when the operator is not inside it. If elimination is not possible, PCBUs must implement engineering or administrative controls. Engineering controls include changing the physical characteristics of the plant or work area to remove or reduce the risk. This can entail installing a handbrake warning system to alert drivers when the handbrake has not been applied, or chocking wheels on both sides of the vehicle using serviceable purpose-built chocks.

Administrative controls include developing safe work procedures for conducting vehicle inspections, and use of stands, jacks, chocks or other systems for immobilising vehicles. Further administrative controls include providing instruction, training and supervision to workers regarding safe work procedures, and ensuring worker training, experience and competency aligns with the requirements and complexity of the task. PCBUs can also implement exclusion zones around vehicles, ensuring these are clearly marked and enforced. Control measures should also be reviewed regularly to ensure they are effective.