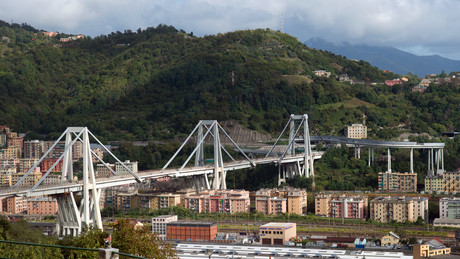 The collapse of the 1967 Morandi Bridge in the Italian city of Genoa last week has killed over 35 people and injured dozens. According to reports, investigations into the cause of the collapse are focusing on allegedly inadequate maintenance or allegedly possible flaws with the unusual reinforced concrete bridge design.

Bridge management, inspection and maintenance can be costly but bridges are not set-and-forget pieces of infrastructure said Dr Colin Caprani, a Senior Lecturer in Structural Engineering at Monash University in Melbourne.

“In a structural sense, [bridges] are living, breathing critical links in our daily lives. The costs of a calamity in terms of human, social, economic and reputation far outweigh the costs of proper care. Compared to large-scale new pieces of infrastructure though, these costs are not as attractive to decision-makers or the public: no-one cuts a ribbon when an old bridge is repaired.”

According to a Reuters report, Autostrade per l’Italia, the Atlantia unit that manages the stretch of motorway in northern Italy where the bridge is located is expected to hold a special board meeting this week. The company’s shares have dropped and credit rating agency S&P has placed its ‘BBB+’ rating on Atlantia on CreditWatch negative to reflect the risk of potential litigation and possible fines.

“It is surely time that smart sensing solutions are used across all our aged infrastructure to protect people from events like in Genoa,” Caprani said.

Professor Sujeeva Setunge, the Project Leader for the Bushfire and Natural Hazards CRC and the Deputy Dean Research and Innovation SOE at RMIT University, has also commented on the Genoa bridge, which collapsed during a violent storm with heavy rain. She said the collapse demonstrates the urgent need for understanding the vulnerability of bridges under effects of combined loading of normal traffic and natural hazards while allowing for the natural degradation of structures.

“We are investigating the likelihood of failure of a bridge under combined impact of extreme events and other loading here in Australia, through our team at the Bushfire and Natural Hazards CRC, RMIT University, the University of Melbourne and the University of Southern Queensland,” Setunge said.

“The modelling completed to date has demonstrated that the failure probability of a bridge superstructure as well as substructure can significantly increase with the increase of the intensity of the hazard, in this case, the rainfall and also the degradation of the structural components under mechanisms such as corrosion or scour. Often, in the design of bridges, it is assumed that at an extreme event the bridge is not carrying the full traffic load, which is not always realistic.

“Here in Australia, we have found that the failure of some of the bridges during the 2010–2011 Queensland floods could have been avoided if the vulnerability of the bridge had been under assessment prior.

“We have also identified all critical bridges in Victoria and are developing vulnerability models to demonstrate the likelihood of failure of the bridges under extreme natural hazards. This needs to be expanded to all states of Australia,” Setunge concluded.