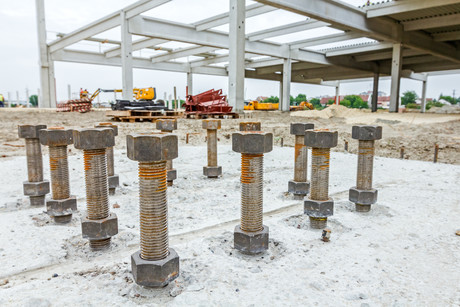 Pull-out failure of screw anchors is a major concern for building, construction and infrastructure projects looking to maintain top Australian and global standards of safety. Screw anchors are typically used to secure objects to materials such as concrete that would normally be resistant to screws and nails. They are gaining popularity in construction and infrastructure because of their simplicity of installation, ability to bear load straight after installation and ease of removal. The last thing any worker or site manager wants is for a screw anchor to fail or pull out when it is supposed to be supporting a heavy or valuable load, or keeping two objects securely fastened together.

To establish the strength and resistance to pull-out failure of screw anchors, researchers at Edith Cowan University (Western Australia) and Swinburne University of Technology (Victoria) are using Enerpac industrial hydraulics to test, measure and accurately predict the screw anchors’ tensile loading capacity and failure point. The testing conducted by the two universities involves multiple types and diameters of screw anchors, using concrete of different compressive strengths and age. Aspects of the research compare results achieved in experiments with the predicted values of the Concrete Capacity Design (CCD) method.

The series of hundreds of tests involved in the ongoing program use an Enerpac double-acting 30-ton capacity hollow pull-cylinder mounted in a reaction frame with load cells, displacement transducers and strain gauges to measure results of multiple tests, including predicting the tensile strength of screw anchors failing under pull-out failure mode. The test rig developed by the School of Engineering researchers from both universities is powered by an Enerpac portable electric pump with a 1.25 kW universal electric motor featuring high oil flow and bypass pressure. This provides the portability, reliability and power-to-weight ratios required to conduct multiple tests to the point of bolt destruction in many cases.

A reaction frame with a clear span of 500 mm was used to support the hollow cylinder jack and a hollow load cell. According to ETAG 001-Annex A (2013), this span can be used for testing anchors with effective embedment depth of up to 125 mm, the researchers at Edith Cowan University said. The hydraulic cylinder involved is one of a range in capacities from 30–145 tons for testing, maintenance and tensioning applications. The electric pump used for loading is one of a broad range designed for rapid set-up, then application of force. A needle valve was used to control the loading rate and to apply the load slowly. Displacement was measured using a displacement transducer positioned on top of the head of the screw to measure displacement of the anchor relative to the concrete surface during loading.

Holes were drilled using a rotary hammer drill and anchors were installed using an impact wrench up to just before the head of the anchor reached the top of the fixture. For consistency of installation, all of the anchors were tightened using a calibrated torque wrench to a maximum permissible torque value recommended by the anchor manufacturer. Holes were cleaned using an air compressor and a vacuum before anchor installation. The ongoing test program has been supported by the Australian Engineered Fasteners and Anchors Council and, in Western Australia, by a concrete supplier that provided general-purpose concrete material for the 1.4 x 1.4 m slabs used there.

Demanding industries using screw anchors will benefit from the increased safety assurance that these vital and useful tools will not break or pull out under pressure and heavy loads. These industries include building and construction; infrastructure and civil engineering; road and rail bridges and other structures; mining, oil and gas and bulk handling facility construction and testing.

This program is an outstanding example of practical test work being conducted by universities working with industry to ensure the highest standards of safety and reliability in major areas of building and infrastructure engineering.

Traceability: a digitalised healthcare supply chain for the new decade