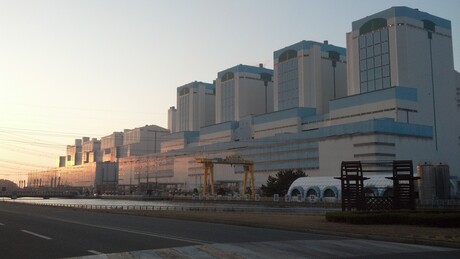 A major unit of a 2400 MW thermal power station in Korea has demonstrated that adding technology to give increased worker safety can increase financial gains returns, rather than cost money. The first unit of the Dangjin Steam turbine of Korea East-West Power Co Ltd has implemented the Australian Technofast Hydraulic CamNut system onto its low-pressure steam turbine casings to produce a “dramatic reduction of downtime” because of reduced overhaul timespans and commensurate increases in electricity production. The Technofast hydraulic CamNut system — and complementary EziTite hydraulic nuts — enable entire groups of fasteners to be torqued or released immediately and simultaneously, rather than being individually installed and released.

This reportedly reduces installation and decommissioning times for regular maintenance by as much as 80%, according to John Bucknell, Technofast Founder and CEO. It also means that workers — who actuate the nuts remotely — are not exposed to the extreme heat of electricity generation tasks and having to wait hours for fasteners to cool down before they can be measured to confirm their clamping load. CamNuts can also be used where grip length is reduced, meaning users no longer need to replace expensive studs to provide sufficient grip length, which is important for reliability and safety, particularly in applications subjected to heat.

Korea East West Power General Manager and Steam Turbine Expert Park Jong Geun said that in addition to the major reason of safety of operators, the CamNuts’ reduction of a day of downtime saves approximately $1 million a year, with total savings to date on the first installation approaching $10 million. Bucknell added that the installation was so successful that the same technology was applied to HIP turbines at the 1190 MW Donghae Thermal Power, which is making the same safety gains while saving millions of dollars since installation. Since then, other Power Stations in Korea have adopted the same technology. The technologies have also been installed globally in nuclear, hydro and clean/green technologies where it is important to protect workers by minimising time at the workforce while keeping production online with the shortest interruptions — thereby achieving radical savings in costs while cutting downtime by more than 75%. 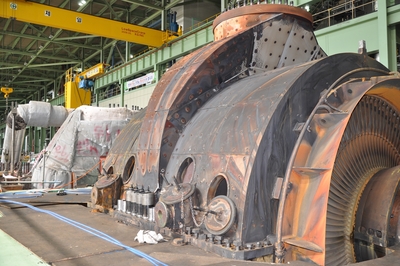 The Dangjin power plant in South Korea, consisting of four 600 MW coal-fired units, uses the Australian CamNut system not only to increase operational safety, but also to save millions in the process. Image credit: Rupert Kim.

CamNuts are rapidly applied using the complementary EziJac tensioner tool. The fast and secure hydraulic fastening system uses hydraulic force to draw and to release the bolt with a manually positioned lock-ring used to hold the bolt tension, rather than each fastener being locked or loosened individually by operations staff using wrenches to torque the bolt by rotating it on the thread or using heat processes. The reverse procedure permits equally rapid disassembly when it is eventually required for service or breakdown repairs.

Park Jong Geun said that previous heating methods used at the Korea East West Power installations could not be operated simultaneously, needing longer hours to heat up and cool down and introducing issues such as measurement of elongation of bolts. This method can also cause serious damage and burns because of exposure to heat generated by thermal heater tools. CamNuts’ direct extension methods avoid thermal stress and the heat deterioration of bolts. Applied onto existing fasteners, the CamNuts operate simultaneously to reduce costs through the reduction of downtime and the extension of lifespans of material no longer subjected to thermal stress. Tangible effects include increasing reliability of the system, plus greater production, safety and usability. Bucknell noted that, besides eliminating the safety hazards associated with more laborious maintenance methods, CamNut and EziTite fasteners optimise long-term safety by providing even tensioning across a range of bolts, where tensioning precision is vital to long-term performance. Additionally, accurate and even loads on the flange/joint enhance the ongoing reliability of the machinery in service.

“Increased safety and downtime savings of 75% are commonly achieved on a range of power turbines used around the world, including nuclear power plants where workers need to proceed with optimum time-saving and safety, and all installations where there can be major cost penalties if electrical supplies go offline for extended periods,” Bucknell said.

Using CamNuts also reduces the need to replace expensive studs to provide sufficient grip length, while their modular construction reduces overall tool weight. The CamNuts are designed for extreme situations and adverse conditions. The CamNuts are also user-friendly to improve safety, achieving reliable and precise tensioning the first time. The CamNuts require little physical effort and are fast to fit and remove. They are also designed to reduce breakdowns and damage, while reducing the risk of strike and pinch point injuries caused by other tightening methods. Different Technofast installations — tailored to individual needs — are establishing new benchmarks for efficiency and safety. Typical applications include turbines and associated valves, which are used to generate electricity and in marine and locomotive propulsion.