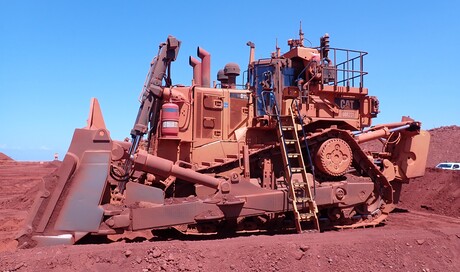 The project was undertaken in collaboration with WesTrac and Caterpillar, and saw the company rolling out a solution that utilises the Cat MineStar Command for Dozing Technology and a dedicated operator control centre — allowing for non-line-of-sight operation of dozers working in high-risk areas.

There is also an over-the-shoulder console that allows operators to work within visual range, typically used for temporary or one-off movements of machines. The remote operator control centre is similar to a simulator with all the in-cab controls replicated. The tele-remote dozing system introduced for Rio Tinto’s iron ore operations also incorporates a vision kit, making use of four cameras on board each dozer and relaying machine information and visuals in real time via a Wi-Fi network.

As the solution was rolled out, any initial resistance to relocating from the cab to a nearby remote operator station was quickly overcome. Rio Tinto Superintendent Process and Technical Michelle Woolcock said the overarching brief was to effectively manage potential safety risks associated with dozers working in areas that were more susceptible to risk.

“The brief was to take the operator out of the line of fire, in particular to reduce the risks associated with slipping or stability issues, for example when they were working on stockpiles or close to steep walls,” Woolcock said.

Rio Tinto Superintendent Operational Readiness Jamie Webster said the initial rollout of the TDS at the Cape Lambert Port facility north-east of Karratha was focused on high-risk operations on coarse ore stockpiles with steep gradients and “live” areas where ore is fed into underground tunnels. Webster said the dozers operate in a tight area around lots of fixed assets; this means that the work is quite intricate and the real benefits will be realised in pushing ore from the stockpiles into the live zones.

“The dozers are working at the top of a large stockpile and if a dozer slips it could go down a bank, or if it’s working while the apron feeder is operating, the ground could fall away from underneath it. Obviously, we already have processes in place and technology to mitigate such risks but putting the operators into a station away from the danger zones eliminates any potential risk of harm, no matter how small that risk might be.”

While removing operators from high-risk zones drove the rollout of the solution, Woolcock said it does not mean operators will be removed from site, with remote operators still needed to be “close to the action”, with detailed site knowledge to function most effectively and efficiently. Woolcock said that despite its name, the ‘non-line-of-site’ operation still requires operators to multitask in their roles; depending on the state of the coarse ore stockpile and what’s coming in and going out, operators will need to be able to visually inspect and determine what needs to be done.

“They might spend an hour or two dozing then move on to other tasks while they wait for the stockpiles to be replenished. When you need dozer operators, you typically need all hands on deck, and when you don’t need them, if they’re sitting in a control centre hundreds of kilometres away, it’s far more difficult to stay on top of other tasks they might carry out onsite,” she said.

Woolcock and Webster said there was some resistance among the first trainees, but as operators became more familiar with the solution, they embraced it.

“A lot of operators quite literally work the dozers through their seats. They might have worked for decades and are accustomed to feeling the movement. So they’re having to relearn how to drive the dozer without that sense of movement, and they’re relying entirely on the visual feed of information rather than the other senses from being in the mobile rig,” Webster said.

“Every site and situation is obviously going to have some unique aspects, but there is a set of core requirements that will apply across all implementations. It starts with an audit on the available machines to understand the current capabilities, then we can define the technology requirements to be fitted to those machines. Across an operation like Rio Tinto’s, we’d typically expect to see a fair bit of consistency but there may still be differences based on the age of the site and the asset maintenance and replacement schedules. The system readily interacts with other Cat control systems including MineStar Terrain, so we can set up working parameters including geofencing and avoidance zones,” he said.

Those operating parameters and control solutions will be vital as the TDS technology is rolled out across Rio Tinto’s mine sites, including its new Gudai-Darri mine. When production commences this year, the site will feature a large fleet of autonomous haul trucks, water carts and drill rigs. In such environments, any manually controlled equipment, whether in-cab or remotely operated, must be equipped to interact with autonomous machines. While every aspect of the TDS technology and how it interacts with other equipment is safety focused, Webster said that in time, the operators will see productivity gains too.

“There’s still a lot to understand about how we can be the most productive with this system. As we’re learning and developing, and as everyone becomes more familiar with the new way of operating, the added comfort and control will lead to operators being even more productive than we are today,” Webster said.

Improving the flavour of plant-based meats

Fresh off the grill — the 2022 World Steak Challenge winners