Machinery to enhance safety in decommissioning, repurposing and construction tasks 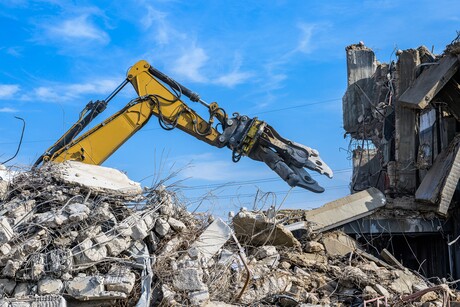 The decommissioning and repurposing of obsolete plant is becoming an Australasian and international issue, as the mining and energy industries increasingly turn to new-age metals, minerals and materials required by emerging clean, green economies. Behind the latest headlines — such as major financial institutions working on new plans to accelerate the closure of older coal-fired power plants in Asia — lie significant issues, with Australia, for example, being home to four of the 10 largest coalmines in the world, with the US and China two of its main production rivals. This, combined with the ecological issues surrounding oil exploration and extraction, makes the decommissioning and repurposing task extend across the face of the Asia–Pacific on land and at sea. Enerpac Asia-Pacific Marketing Manager Tony Copper noted that although oil plants, mines and power stations are huge community assets that won’t just disappear, some will definitely change their shape and purpose.

Enerpac is a global brand that has a record of hydraulic innovation extending back more than a century, which it is now putting to work with new streams of decommissioning and repurposing technologies for its long-time customers in the mining, energy and construction sectors. Cooper said the job is huge worldwide, as open-cut coalmines in the US are even larger than those in Australia, being the size of towns, extending out to pits of eight kilometres long and 180 metres deep, while underground mines range from the 200–600 metres typical in Australia to more than twice that in Canada. They are vital community assets, with a large and highly trained workforce, as are the energy plants that face eventual repurposing in a bid to phase out the use of the man-made contributors to climate change.

The current surge in new infrastructure development in Australasia — coupled with a rising wave of decommissioning and conversions of obsolete fossil fuel plant — presents a range of challenges for mine and energy plant operators. In response, suppliers like Enerpac are assisting the industry to adapt most efficiently with tools that are safe and require fewer people to do time-consuming and hazardous tasks. “Before heavy machinery does the heavy work, there are myriads of smaller jobs to prepare for the demolition to proceed safely. Afterwards, there is an equally large host of clean-up jobs to do before the construction tasks of repurposing begin. All of these demand lighter, ergonomic, powerful tools that reduce physical effort on the part of the operator, reduce the numbers required to do a job safely and make it happen quickly and cleanly,” Cooper said.

Enerpac has responded to the challenge with a stream of technologies to fast-track this process of change. Often, they involve light and ergonomic higher-pressure hydraulics (up to 700 bar/10,000 psi) that pack a large amount of power into the smallest and lightest tool. Adhering to its ‘Goal Zero’ safety objective and clean, green workplaces, Enerpac has brought more energy-efficient pumps and decommissioning and recommissioning tools to the market, including tools that lighten the load while they increase the efficiency of operations, such as bolting and unbolting, cutting, bending, forming, lifting and shifting. It also backs them locally and globally with service standards built up in the Asia–Pacific over 50 years.

Enerpac’s technologies priorities include choosing the right type of safe, energy-efficient tool. Decommissioning tasks frequently involve a multiplicity of tools purpose-built to curtail hazard, risk and delay potential that safety-conscious and efficient companies and utilities cannot afford. Cutting and fitting cables, and dealing with rebar and chains powerfully and safely, are among the most common jobs on decommissioning and repurposing sites. Cooper explained that the old days of bashing, burning and tearing and fading away, with new tools emerging to complete the job in a safer, faster and more precise manner. Hydraulic drive-and-feed portable saws provide a safe and time-saving solution for a diverse range of tubular severance projects. Such band saw ranges deliver cost-effective solutions to cold cutting requirements in either surface or subsea situations.

The company also aims to join the battery tool revolution, as battery tools can be ideal for remote or confined space applications on land or at sea, where maximum force is needed for speed and safety. Conscious of their duty of care, companies are embracing new easy-to-handle hydraulic tools powered by battery technology. Cooper adds that this technology has reached a point where cordless alternatives (such as hydraulic pumps) can now offer the same performance as their corded counterparts. Cooper said it is similar to the increasing distances that electric cars can travel; the same heavy-duty increasingly efficient battery technology is useful for cordless tools, with a sufficient fuel reservoir to last whole shifts without the need to replace or recharge the battery. “A bonus is that they can be used in locations where there’s limited or no access to power, such as remote sites, inaccessible machinery or high places where dragging a cord around is not an option. Not to mention obviating the risk of electrocution,” Cooper said.

Powerful tools don’t have to be noisy and there is a very good OH&S reason why they shouldn’t be. An increasing number of Australian workers are exposed to dangerously loud noise, with those aged in their 50s and 60s often among the most skilled and also the most affected by hearing loss and prone to further damage. Where decommissioning bolting tasks can be accomplished by quieter, precise and powerful tools, there are multiple benefits to older workers more prone not only to hearing loss, but also to slip and fall incidents. Enerpac electric pumps, including the ZU4 Pro Series torque wrench pumps, are part of a broader Enerpac ZU4 pump family that runs quietly and further enhances safety by cutting out repetitive setting tasks. The ZU4 Pro, for example, allows operators to program the desired torque amount into the pump along with the torque wrench model they’re using. With this feature, a worker does not need to use a pressure chart to complete a torque output-to-pressure conversion. The feature removes several steps of the manual process, saving time and reducing the likelihood for human error. In addition, users can get pump usage information, receive warnings and see other diagnostic information.

When disconnecting and decommissioning work is completed — and before demolition begins — there will likely be major items of useful plant that need to be lifted and shifted for repurposing. Generators, turbines, motors and other valuable plant may have spent decades firmly fixed to the floor. “They are not really inclined to travel, without gentle but very firm persuasion to unstick them from their resting place in a controlled, balanced and steady manner with intense control of the job through all phases of the job,” Cooper said. Low-profile hydraulic spreaders, low-profile pancake jacks and load skates can be very useful to get the job started, particularly within interior spaces, to give access and positioning underneath the plant. Access can include setting up for lifts either from above (cranes) or from below (multiple high-stability, high safety synchronised lifting technologies using PLC control to ensure safety).

The heaviest lift and shifts can be assisted by anti-sway crane technologies or by PLC-controlled synchronised lifting using multiple cylinders, all regulated from one point. Examples include Enerpac’s PLC-controlled Synchoist for cranes, or its family of Synchlift technologies, for larger jobs. These systems can be controlled from one point to hoist entire energy production platforms, for example, involving hundreds of cylinders. Or multiple cylinders on the biggest mining equipment, including draglines. Cooper, who has had more than 30 years of engineering experience in the application of advanced hydraulic technologies, noted that lifting gantries are another safety-friendly technology. Lifting gantries are engineered to provide portable and easy-to-use solutions for machinery movers, plant relocation services, millwrights and electronic equipment installers who need to move machines and equipment with controlled balance in compact spaces.

Enerpac’s latest family of lifters — which extends over hundreds of tonnes — is the simply set up ML40-ton Mini-Lift Gantry. The gantry’s compact size makes it suitable for moving equipment around new or old installations even without rails, including when moving machines or parts of machines either within the same building or to another building. Its short, collapsed height and narrow width means the ML40 Mini Lift Gantry can get into spaces that other equipment cannot, with Cooper adding that this gantry design can also rotate the load (up-end or down-turn) to move through the building. “The Enerpac SL-series and SBL-series gantries have always stood for a safe and efficient way to lift and position heavy loads in applications where traditional cranes will not fit and permanent overhead cranes are not an option. When used with a track system, Enerpac hydraulic gantries also provide a means for relocating heavy loads with speed, control and safety,” Cooper said.

Cooper forecasts that some parts of the mining industry will continue in their currently successful form, while others will change. “They are too great an asset globally to disappear — look at the steel industry alone — but many coal plants will face huge change as they adapt to new industrial purposes or — in the case of non-competitive plant — return to the environment and rehabilitation. Our objective — and the objective of all long-term suppliers to heavy industry — is to share the journey with them and make a strong contribution as they change into the future,” Cooper said.

Plant Assessor is a machinery safety platform that helps users ensure that machinery is safe for...

Siemens Australia and Murray Engineering have developed an electric vehicle charging station that...