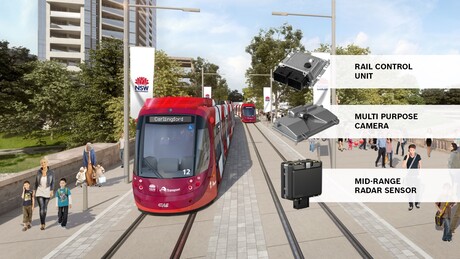 The driving of trams requires maximum concentration over long periods of time, meaning that in complex traffic situations, collisions with other vehicles may occur.

To mitigate this, Bosch developed the warning system, which CAF Rail will install onto the vehicles for Stage 1 of the Parramatta Light Rail network.

“This is a logical application of driver assistance technologies found in other types of vehicles — it will make tram travel safer for everyone, helping to protect human lives as well as preventing accident damage,” said Gavin Smith, President of Bosch Oceania.

“We want the Parramatta Light Rail to be one of the safest and most reliable public transport systems in Australia, so the Bosch collision warning system is a perfect fit for us,” said Ramon Muntada, CAF TE Area Manager.

“Not only will it benefit the drivers of the light rail vehicles, but it will also help to reduce accidents.”

The information is merged into a very detailed image of the surroundings and supplemented with additional information, such as the speed of the tram. If the system detects a critical approach, it warns the driver visually and acoustically.

Although the AI-based system reacts autonomously, the driver can intervene and override the system at any time using the driver acknowledgement function.

This technology can play a key role in preventing tram accidents. Recent statistics reveal there were 612 collisions reported between a tram and road vehicle and 23 between a tram and person in Australia in the 2020–2021 financial year1.

The collision warning system has an extended functionality that introduces automatic emergency braking if the driver reacts too slowly or not at all to the warning.

The technology not only saves lives but also significantly reduces costs for operators by reducing network downtime and thus improving the reliability of the service to passengers.

In 2021, the system was already used in approximately 550 trams in 19 cities across Europe. This year, the system will also be introduced in North America.

Image caption: The tram forward collision system is based on the interaction of radar, camera and control unit.