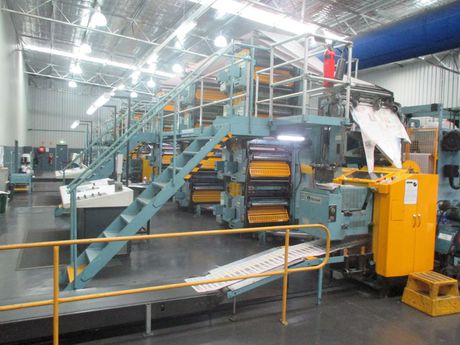 When Fairfax Media built a new print facility in Tamworth, NSW, it not only had to consolidate several regional printing presses, it also had to upgrade ageing equipment to improve health and safety at the site.

As part of a national move towards increased plant safety, Fairfax conducted a risk assessment with Goss International and Rockwell Automation and, following this, implemented a safety system that has produced the company’s best safety record.

Rockwell Automation provided GuardLogix safety controllers to meet all of the press’s safety and control requirements. “The control and drive system was configured so that some particular safety guards could not be opened until the press reached a slow speed, while opening a unit guard at the inappropriate time would stop the press to help prevent injuries,” explained Peter Tomazic, senior solutions consultant at Rockwell Automation.

DeviceNet provided communications between the Safety IO and GuardLogix, while four PowerFlex DC drives were used to power the press, which were linked back to the control system using ControlNet communications. Over 110 Sipha sensors were put on the guards to help keep fingers out and avoid injuries.

Tomazic said the company introduced ‘zoning’ into the safety system so that when the machinery is run as two separate presses, the safe stop of one press does not control the other.

“There is also an emergency stop which can stop everything if required,” he said.

David Hedges, plant manager at Tamworth Press, said overall there has been no hold-up in production or maintenance schedules.

“We have found the working components offer great reliability,” he said. “We have implemented a monthly checklist to make sure all the guards are working and operating correctly. Every month we physically disconnect and open the guards on all our guard switches.”

Since the installation there have been no reported failures on the guard switches, nor injuries or near misses.

“We’re now up to 2369 days without lost time injury, so we know that our staff will be able to go home at the end of the day in the same way they came to work each and every day,” Hedges added.