The rise of the cordless machines: safety benefits of a new generation of tools 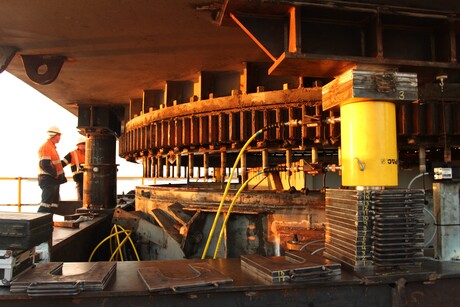 Conscious of their duty of care (and the awful cost of injuries and shutdowns), companies in industries with high safety priorities — such as mining and energy, construction and infrastructure — are embracing a whole new generation of powerful, portable and ergonomic tools that lighten the load while they increase the safety and efficiency of operations such as bolting and unbolting, cutting, bending, lifting and forming.

The huge surge in new infrastructure development in Australasia — coupled with a rising wave of decommissionings and conversions of obsolete fossil fuel plant — will present an array of safety challenges and opportunities for industry in the years ahead. Old manual methods of infrastructure construction and renewal will be replaced by new ways of exerting maximum force with minimal risk to workers, as we gratefully leave the age of flogging spanners and wasteful and unnecessary practices.

Hydraulic battery technology has reached a point where cordless alternatives (such as hydraulic pumps) can now offer the same performance as their corded counterparts, with a sufficient fuel reservoir to last whole shifts without needing to replace or recharge the battery. An additional bonus is that they can be used in locations where there’s limited or no access to power, such as remote sites, inaccessible machinery or high places where dragging a cord around is not an option. Not to mention obviating the risk of electrocution.

In saying this, I should emphasise that for a myriad of applications, a corded tool is totally safe, and the ideal solution where the cords and power input are completely out of anyone’s way. And it should be emphasised too that both corded and cordless hydraulic tools available now are pursuing a path towards lighter weight and far better ergonomics and safety than ever before. This is particularly the case where the hydraulic technology is high-pressure (700 bar, 10,000 psi), which concentrates the greatest amount of force into the most compact and therefore easily handled tools. And for all clean, green electric tools — corded and cordless — increased safety is critical because of the huge personal and national costs of workplace accidents.

The toll on workers and businesses

A worker is killed at work nearly every second day in Australia, and as tragic as these deaths are, these figures represent just the tip of an accident iceberg. According to Safe Work Australia (SWA), work-related injuries cost the Australian economy around $60 billion every year, representing almost 5% of the nation’s GDP. Workplace injuries impose a terrific physical and mental toll on victims and their families. Injuries also prove to be a massive drain on businesses’ costs and productivity, with stoppages and remediation always involving downtime and punishing the uptime and efficiencies industries are seeking in these competitive times.

The industries on which I will focus this article — agriculture, transport, mining, construction, energy, manufacturing — make up the top six hazardous categories (which, in fairness, reflects the fact that these are also huge industries and big employers that have made many and continuing strides to minimise accidents).

Common injuries and tools that can help

The most common injuries across all industries, according to SWA, include sprains and strains of joints and muscles, which comprise 41.8% of all incidents. These are most often caused by poor manual handling practices and improper work health and safety handling, which can lead to the ubiquitous slip and trip accidents, among others. Workers who are required to bend and move their bodies to lift, carry or push heavy items are at serious risk of straining their muscles.

Following are some of the most common hazardous situations we seek solutions for by involving ergonomic, portable and cordless tools, or new technologies that replace manual inputs with time-saving and safer alternatives:

Of course, having the appropriate safety training to ensure standards compliance, and the safety of everyone involved is vital, whatever solution is adopted.

Carrying out bolting operations at height runs the risks of slip and fall accidents and the danger of dropped objects to those working beneath. Falls from height or being hit with moving or falling objects are among the major causes of death, and the cause of thousands of serious injuries to workers on construction and infrastructure projects. Such hazards will also become a greater challenge in the energy industry as wind towers become more and more prevalent.

Lightweight ergonomic cordless tools — properly secured, with proper training — help provide a solution by which workers can safely exert precise force on repetitive tasks such as bolting. Such lightweight tools will also provide a solution to fatigue when working in confined spaces, where there is limited room to manoeuvre around the workpiece and where manual labour can be hot and rapidly fatiguing.

Another area where cordless tools are making safety inroads is in the servicing of cranes and conveyors, without which industry ultimately cannot function.

“The new belt lifter effortlessly raises the belt in 20 to 25 seconds without requiring complex input from the user,” said Justen Wright, Principal Engineer, Techmine, and inventor of the technology. “An 1800 mm belt lifter, comprised of three main parts, weighs only 29.5 kg once assembled. The main 13.7 kg lifting beam is ergonomic and easily portable.” 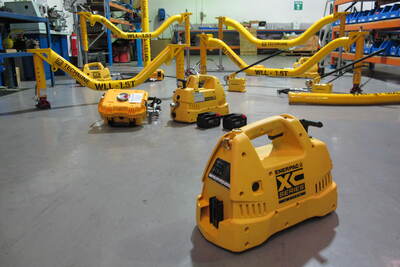 Heavy lifting always presents challenges, both during the process — and sometimes further down the line, when unbalanced lifting can permanently compromise the long-term safety and stability of the structure being created. This is another area where technology is overtaking old methods, whether the lift involves, say, a single turbine or transformer, or an entire oil production platform, which must be precisely assembled, lifted, shifted and loaded so it can withstand the long-term effects of exposure to the elements at sea.

For example, high-efficiency, high-safety synchronous lifting technology, where required, can allow multiple cylinders to be used simultaneously to lift structures within an average accuracy between the cylinders of a millimetre or less. This technology can also weigh and balance the load, during lifting and shifting, to ensure safety and longevity of the structure. 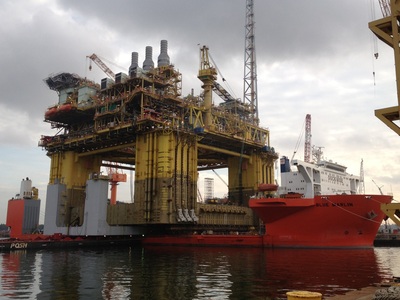 One of the biggest jobs using this technology in recent years was where Malaysia Marine and Heavy Engineering used 352 compact, high-pressure 300-tonne cylinders to lift and skid the 43,000-tonne Gumusut-Kakap floating oil production system onto a vessel waiting in the Straits of Johor. While the technology employed is capable of lifting and shifting far greater weights than the Gumusut-Kakap (it can lift more than the equivalent of the 52,000-tonne weight of the steel in the Sydney Harbour Bridge, for example, or reposition a tunnel boring machine) it was the system’s ability to sense and control any deflection of the pontoons and main superstructure that won it plaudits for protecting structural integrity throughout the lift-weigh-shift-and-launch process.

The same synchronous lifting technology enabled contractor partners SKF and Sandvik to achieve precision, safety and avoidance of downtime during a 220-ton lift to facilitate slew bearing replacement on a GrainCorp ship loader at the Gladstone Port Terminal in Queensland. The EVO synchronous lifting system — using PLC control to manage four heavy-duty CLRG cylinders simultaneously — was used to lift the upper structure of the ship loader more than 300 mm, allowing the old bearing to be taken out and a new one put in.

High-tonnage cylinders linked to an EVO system help lift the slew bearing for SKF and Sandvik in Gladstone, left. The EVO lift in progress, right.

When taking the slew bearing out of the Port of Gladstone loader, the upper structure needed to be lifted straight up with absolute precision. The EVO system managed to stay within an average accuracy between the cylinders of 0.54 mm, which is incredibly accurate for a lift like this. Using the EVO synchronous lifting system allows companies like SKF and Sandvik to lift all sides of the bearing evenly and precisely from a central control point. By digitally monitoring and controlling lifting operations, they can enhance safety and precision compared with manual lifting operations.

The 700 bar high-pressure hydraulic equipment — supplied by Cooper Fluid Systems in Mackay — is used to assemble the chain links to form ABON conveyors of a type produced by FLSmidth for extensive use in the mining and energy, coal, cement and aggregate industries.

GIS eliminated the need to use flogging tools during on-site assembly by introducing into their workshop a neatly portable combination comprising Enerpac’s C-clamp, 10-ton cylinder and lightweight PU series Electric Economy Pump with pendant control and pressure gauge for safety.

The old way, left, and the new, right.

The new combination is used in ABON OEM work in the workshop to precisely assemble chain lengths often weighing more than a ton, typically achieving tasks in one day that previously might have taken several. The combination weighs less than half the 37 kg of the previous customised tool that took two people to lift safely and required a crane for positioning. The new tool is also light enough to be taken on-site for maintenance tasks, where it also increases the safety of the job and cuts the time taken to do it.

The time for cordless machines is now

Recent worldwide events have forced a rethink of the old ways of doing things. During the coronavirus (COVID-19) pandemic, for example, we have all been forced to look at new ways of performing old tasks. Because we couldn’t have too many people together, there has been a spurt in the relevance of digital technologies (such as the EVO synchronous lifting technology). Technologies that enable us to do a better job, while removed from danger, are getting a real boost. At the same time, the automotive transformation from fossil fuels to electric power has taken giant strides.

Over the last decade a surge in lithium-ion battery production has led to an 85% decline in prices, making electric vehicles and energy storage commercially viable for the first time in history. Battery-based safety tools have benefited immensely. Once not regarded as a serious heavy-duty tool, they are now coming into their own as a mainstream safety product, benefiting both the environment generally and their users particularly. Sometimes, it seems, it takes a major problem to produce a major advance. Let’s make this the case for safety in the workplace, which is a concern we all share.