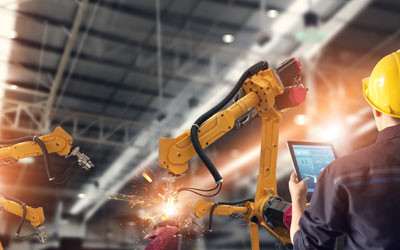 Accidents happen. We’re only human after all, or so the saying goes. The risks of making a mistake are even bigger when it comes to industrial workplaces. Time lost to health and safety incidents reportedly cost the Australian economy over $61bn — and that’s not all. Between 2016 to 2017, there were 106,260 total workplace accident claims in the country, amounting to 5.6 claims per million hours worked. Many of these claims involved injuries resulting from working alongside machinery and being injured by moving parts or objects. With a growing dependence on automated processes and robots in manufacturing, these statistics highlight an important question — are robots safe to work with? And will they make workplaces safer?

Since industrial automation was introduced in the 1900s, robots have played an essential part in the production and delivery of goods. During this period, Ford Motor Company pioneered quick assembly, with mass production processes aided by machines. With huge efficiency gains as a result, these practices were rapidly adopted across the world.

In Australia, while there is a sizeable manufacturing base — especially in sectors such as food and beverage production — the industry has been slow to adopt the latest tools and technologies. For example, there are 50% fewer firms engaged in automation when compared with countries leading the robotics charge. This is despite the fact that our local robots industry generates $12bn per year, and employs 50,000 skilled workers.

Part of this reluctance is attributed to a lack of expertise and knowledge in robotics, as well as fears relating to health and safety. Robots, after all, often look big and scary, and employees can be hesitant to work alongside something that they don’t understand and which, used incorrectly, can have serious consequences. And it’s true, working with industrial robots, like with any machinery, does carry risks. But with the right applications, understanding and better integration, they are incredibly useful tools for businesses that can also take workers out of the most dirty, dull and dangerous situations.

Processes like painting, grinding or cutting fibreglass can all release small particulates that are harmful to humans. Similarly, picking and packing can cause repetitive strains or more serious injuries. According to Safe Work Australia, there were over 20,215 back injuries between 2016–17, accounting for 19% of all workplace injuries. Setting up robots to take on these tasks can not only increase safety but also improve worker wellbeing, as employees can focus on less onerous or demanding activities.

In larger manufacturing plants, industrial robotics are used to produce complex goods such as vehicles, whitegoods and other machinery. In these workspaces, industrial robotics are subject to several layers of safety requirements and certifications, including safety stoppage measures, caging and impact force limitations. Operators need to be highly skilled and have specialist knowledge to use the machines safely. This can be impractical for most workplaces, which may not have either the space for the required safety controls like fencing or the employees with the specialist skills needed to work with robots.

Newer technologies can solve many of these problems. For instance, collaborative robots (or cobots) can provide an alternative to traditional industrial robots as they are designed specifically to work safely alongside people. This means they can be used by manufacturers of any size, in close quarters with workers, as they have in-built safety features such as force limits which instantly prevent any further motion if a cobot’s movement is interrupted, such as if it came into contact with a person working next to it. In fact, it’s even possible to program ‘virtual barriers’ around the latest models, meaning the cobots will not move outside of a predetermined space.

Rather than working autonomously, cobots work alongside humans and are easily programmed to undertake a variety of tasks. These tasks including picking and packing, sorting and other repetitive, dirty or dangerous activities, taking people away from the areas and actions most likely to cause harm. ASSA ABLOY New Zealand is one company that has already implemented cobot technology and has seen a clear impact on its employees’ health and safety on the company’s lock-making production line. Prior to deploying a cobot to assist workers with assembling locks and screwing in face plates, the company had to rotate staff on the line every two hours, to avoid strains from repetitive wrist and shoulder movements. Now, a cobot performs the final step on the production line, so workers can stay in place for the duration of their shift.

For many, robots are the future of manufacturing and beyond. Not only will they improve productivity and create efficiencies for companies, they will also improve the health and wellbeing of workers in a range of industries and work environments. Already, we’re seeing robots used in real-life, dangerous situations — as first responders in accidents or in environments humans cannot safely access, such as nuclear reactors. Soon, robots will assist people in a range of jobs with more straightforward work and applications. This has the potential to significantly reduce the rate of workplace incidents from the levels seen today.

Measure the risks before you enter a safety and compliance minefield

In food processing machinery there are stringent hygiene standards that must be followed both for...

Unmanned aerial vehicles, or drones, are being used increasingly in industries such as...