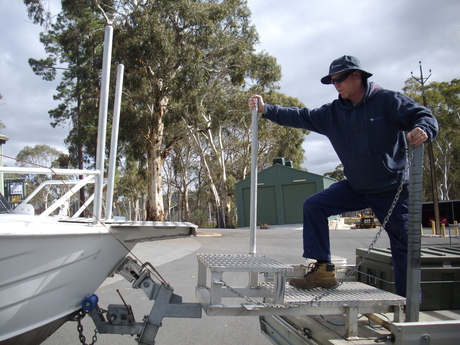 A small team at SA Water set out to design a solution to enable safe boat access, as they couldn’t find a suitable product in the market to address a recurring problem they were encountering.

Water sampling at SA Water’s reservoirs is critical in ensuring water quality is maintained year-round. Maintenance and construction worker Jason Carls takes samples of water from seven of the state’s reservoirs up to 11 times a week. This daily procedure requires a worker to reverse a utility towing a trailered boat into the water, before climbing into the boat via the utility’s tray. The process is reversed after work on the reservoir is complete. Due to the lack of an easy access point, workers have previously boarded the boat by climbing onto the trailer and then pulling themselves up into the boat.

“While there have not been any serious injuries to workers in the past, there have been a number of slips, bruised and grazed shins and a potential for falls,” SA Water District Leader South Para Darryl Jones said.

In an effort to improve the current procedure, employees from across two of the state’s reservoir depots began researching alternative methods and products on the market.

“The team carried out extensive research to find a solution to our problem. We found a few alternatives; however, they were always with a different model of boat. This would end up being a far greater cost to the corporation.”

With this in mind, Jones came together with fellow workers Carls, James Kelly and Jake Kelly and began drafting a design which they later labelled as the ‘Safety Steps’.

Developing the design was not a straightforward process and required the expertise of the team at the South Para workshop. After a number of meetings and feedback from fellow peers, the concept was given approval by SA Water management.

The proposed plan was to modify the back of the vehicle tray top and the bow of the boat to enable safe access.

Greg Trevena, fabrication team leader and Sam Lagana, fabrication tradesperson at the South Para workshop, fabricated the steps to ensure they were compliant with Australian Standard AS1657. The design called for the steps to be made entirely out of aluminium, ensuring they were light enough for workers to manually manoeuvre from the vehicle tray to sit firmly in place on the trailer’s draw bar. The vehicle tray top was previously modified on the driver’s side to allow for a drop-down step ladder, enabling ease of access into the vehicle tray. Once the worker is on the tray top, they are then able to undo a safety latch which lowers the safety steps into position. 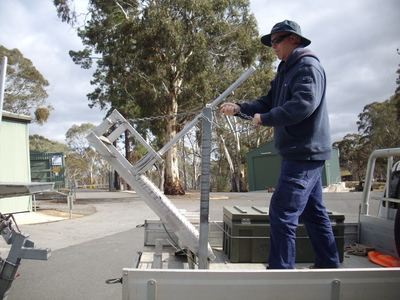 Maintaining three points of contact at all times, the worker is then able to step onto the platform and the bow of the boat, holding the handrails which have been fabricated on the steps and front of the boat. 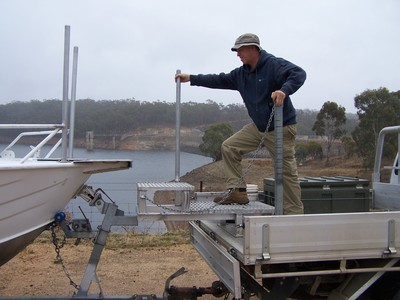 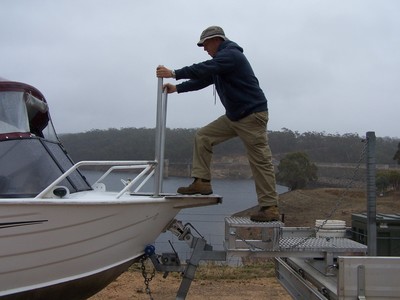 Jason Carls demonstrates how the Safety Steps are used.

“Once on the boat, you can then pull a string inside the cabin of the boat to unlock the latch, which then releases the boat safely into the reservoir,” Carls said.

“This concept has significantly reduced the level of risk in accessing the boats when water sampling in the reservoirs. Ensuring three points of contact at all times when transitioning from the trailer to the boat has resulted in a much safer and smoother method for the workers. The potential for any injury to occur is now minimal,” Jones said.

“The modification has been really well received by fellow workers and we hope that the concept can be shared across other SA Water workgroups,” said Carls.

“‘Safety Steps’ have the potential to be used on different models of boats; however, there may need to be some modifications made depending on the height of the vessel and length of the draw bar,” Trevena said.

The concept was recently been nominated as a finalist in the AWA Water Industry Safety Excellence Award category. SA Water hopes that Safety Steps can also be introduced to other water utilities and any industry requiring a person to frequently board and disembark a boat in this manner.

The Pack King LEV8 single-person lifter is a hybrid, using a ladder (with fitted hand rails), to...

Boosting recyclability in the freezer section

What's new on the shelf this August?