Workers who have to carry out tasks at height are exposed to some of the most significant risks for any industry. It should come as no surprise that standards bodies and safety authorities highly regulate the work methods of such workers and the safety equipment they use. But it may surprise many to learn that our comprehensive standards don’t cover the structural point that is designated to support the forces that are generated when arresting a fall - the anchor points. 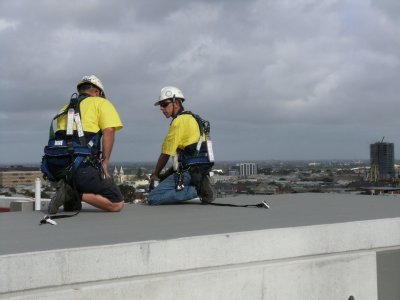 The Australian standard AS/NZS 1891 is designed to cover fall-arrest equipment and is renowned for being the highest and most comprehensive standard in the world for full-body harnesses and shock-absorbing lanyards. The standard comprises four parts:

While these standards are comprehensive, they do not cover fixed-anchor points or temporary anchor points (tripods and davits) - the structurally sound point which has been selected to take the forces generated by arresting any fall. Part 4 of AS/NZS 1891 only specifies the ‘ultimate’ strength rating of anchor points and does not cover design and testing parameters, nor specifications for anchor life, inspection and recertification.

While Australia boasts the highest standard for fall-arrest equipment, one of the most critical components of any fall-arrest system - anchor points - is not covered by the standard. The lack of such an anchor-point standard has led to many inconsistencies in the design, testing and compliance of such devices. In the interest of operator safety, this omission needs to be remedied quickly.

I believe there is a simple and fast remedy that would provide an excellent solution with relatively speedy implementation.

Note that Type C and D anchors, which cover horizontal and vertical lifelines and rail systems, are already covered in Part 2 of AS/NZS 1891.

The design and testing criteria for the specified types of anchors are well defined in the ISO standard and cover both static and dynamic testing.

For design testing under ISO 14567, all anchors must pass a static test under a load of 12 kN for three minutes in each direction of which the fall-arrest force could occur. The anchor may bend, but must show no sign of failure.

The standard also defines the methods of dynamically testing anchors with a load of 100 kg freefalling a distance of 2.5 m. To pass this test, the load must be fully arrested. The test must be repeated for each direction of which the fall arrest force could occur.

There are also a number of lesser tests detailed in that standard, including the salt spray test to ISO 9227 - 24 hours’ spray with one-hour drying.

ISO 14567 requires that all fixings that are to be made to materials other than steelwork or timber (unless they are a ‘through-bolt’ type) are to be subjected to a pull test of 5 kN for 15 seconds. This is also a requirement for recertification.

The testing requirement for a force to be arrested in each direction where a fall can occur is also to be commended, as it addresses a potential risk where an anchor point is only tested in one direction - the most favourable direction - which usually corresponds with the highest directional strength of the underlying structure, such as it applies to metal roof profiles. This testing regime ignores the fundamental fact that most anchor points will be used in applications where a fall can occur in multiple directions - such as when an anchor point is installed on the corner of a building Â– and, as such, can result in the benefit of the directional strength in the structure being circumvented, leading to a potential failure of the anchor point.

However, there are a number of areas where the ISO standard would require to be modified to align it with the existing Australian standards. The suggested modifications of ISO 14567 are as follows:

To reflect the strength requirements in the current Australian standards and to maintain the current safety factors, the static testing should be modified from 12 kN to 15 kN for single use and 21 kN for use by two operators. There is no need to alter the ISO definitions for dynamic testing.

The category of 12 kN anchors - supposedly for limited freefall - in Australian standards should be eliminated to minimise confusion with users.

The ISO standard references compatible PPE as conforming to ISO 10333. To eliminate this anomaly, the Australian standard revision should reference conformance to AS/NZS 1891 Part 1.

Compatible with other AS/NZS standards

There is currently some confusion surrounding the opening of new projects through Standards Australia, but it is believed that a single meeting of the SF015 committee - the committee that prepared the existing AS/NZS 1891 standards - could complete this modification process and have the anchor-point standard introduced to the market within a period of only a few months.

This simple step would eliminate the current confusion on anchor-point standards in Australia. It would also close the loop in having an existing standard that only covers part of the equipment components required where people are exposed to the risks involved in working at height.

* Michael Bermejo is Managing Director of Roofsafe Industrial Safety and a member of the Fall Protection Manufacturers Association (FPMA).

Roofsafe Industrial Safety is taking a leading role with the FPMA in developing the detailed modifications required to convert the international standard into an Australian standard.