Are you ready for the revised AS1657 on walkways, ladders and platforms?

The revised Australian Standard AS1657 for fixed ladders, platforms and walkways released in October 2013 plugs some serious holes. Guard rails made of rubber, for example, are now explicitly unacceptable.

While absurd, rubber guard rails technically complied with the 21-year-old AS1657 and the example shows just how sorely an update was needed.

The biggest changes to AS1657 concern selection, labelling, guardrail testing and the design of fixed ladders. 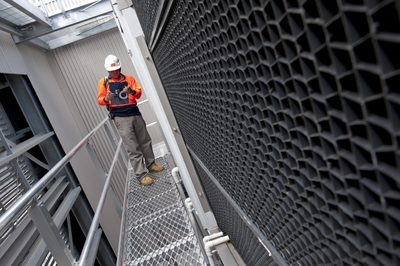 The new standard deals with the selection of access methods. It explains when to use different types of access, adopting a hierarchical approach consistent with the OHS legislation.

A new ‘Safe Ladder’ appendix details how to be sure that ladders satisfy technical and ergonomic requirements for workplaces.

The most significant set of changes to AS1657 concerns the design of fixed ladders. Over the 21 years since the standard was written, there has been an explosion in the sales of ‘cut to size’ ladders, which led to several safety-related issues:

The revised AS1657 includes changes to design criteria, dimensions of rung spacing, mounting of cages, fixings to structures, inappropriate use of hand holds plus several other small issues.

The net result is a clearer and a safer set of requirements for users and manufacturers. Additional costs to the industry are expected to be minor and will be offset by multiple benefits, including:

Identification assists building owners and asset owners to identify responsible parties and assist the workplace safety regulators with incident investigation and root-cause analysis but was not mandatory under the old standard.

The labelling also allows manufacturers to deliver key information such as servicing requirements and special-use instructions, will lift the accountability of suppliers and will assist with traceability and incident investigation.

The testing procedure contained in the old standard was seriously deficient for guardrail. In fact, a rubber guardrail would have passed because there were no deflection requirements.

The new standard, AS1657-2013, aligns with AS/NZS 1170.1 - 2002, requiring higher concentrated loads and line loads for guard railing systems. Importantly, it references standards to ensure the correct application of load factors and load combinations in the design and testing process.

New tests for ladders and staircases have been introduced to align with the testing regime for portable ladders.

Updates to the standard also address the slip resistance of walkways and an alternative test method for stairways other than structural calculation. It is essential that there is a straightforward way of proving the performance of products because many of the items produced under AS1657 are manufactured by companies without the engineering resources to design by calculation.

In the case of mass-produced proprietary systems, the test method is used as an adjunct to design and is compulsory.

Step irons, too, are revisited. While they were covered by AS 1657-1992, additional provisions for sewerage applications were included in AS 4198-1994. EN 13101 is now extensively referenced.

*Carl Sachs is the managing director of Workplace Access & Safety. He was a member of the committee responsible for the revision of  Australian Standard 1657.

Lower the risks when working at heights

Safe Work Australia has released resources about the risks of working at heights, including...

Two serious incidents since December 2019 have prompted SafeWork SA to issue a reminder about...