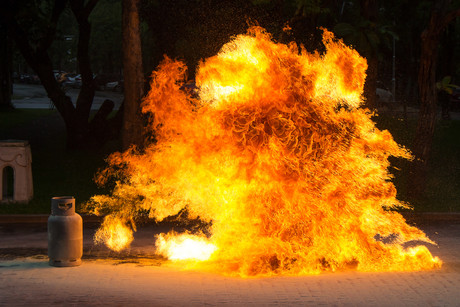 A worker has suffered serious burns while attempting to decommission a liquefied petroleum gas (LPG) tank from a motor vehicle at a workplace.

Workplace Health and Safety (WHS) Queensland believe he was using a battery-operated screwdriver to remove screws on the LPG tank. This acted as an ignition source and started a fire.

Gas systems are commonly installed in vehicles, trailers or boats and can pose significant risks to users and bystanders, WHS Queensland warned, adding that LPG vapour is highly flammable.

If heated or impacted, LPG tanks can rupture, causing a rapid release of gas and flying shrapnel and potentially resulting in a fire or explosion. Additionally, denser gases such as LPG and carbon dioxide tend to collect in low-lying areas such as pits, depressions and basements. People working in these areas may be exposed to risk of asphyxiation, poisoning or corrosive burns on top of the fire risk.

To prevent LPG-related incidents, persons conducting a business or undertaking (PCBUs) should consider implementing higher order risk controls when installing, removing or decommissioning a gas tank from a motor vehicle. This includes a safe system of work aligned to requirements of Australian Standard 2746:2008: Working areas for gas-fuelled vehicles, according to WHS Queensland.

Workers and PCBUs should also check state laws to confirm who is allowed to work with LPG; for example, under Queensland’s petrol and gas laws, only people authorised via Business Queensland can perform LPG gas work.

Before decommissioning or removing an LPG tank from a vehicle, workers and PCBUs should have safe removal and disposal procedures in place and review the safety data sheet to confirm which personal protective equipment (PPE) should be used, such as protective goggles or gloves.

All ignition sources must be kept away from LPG tanks, including naked flames, cigarettes, power tools, cordless tools and mobile phones.

Any tools used to decommission or remove the LPG tank must be suitably rated for use in a hazardous environment. Workers should be aware that reduced-sparking or non-sparking tools made of metals such as brass or bronze can still generate cold sparks that can cause flammable vapours to ignite.

More information on safe gas work can be found via SafeWork NSW and WHS Queensland’s website.