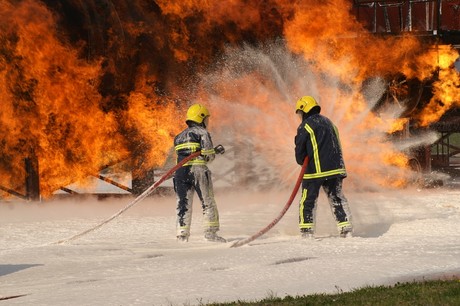 A new technique has been developed for eliminating the toxic chemicals that are linked to firefighting foam contamination.

Per- and poly-fluorinated alkyl substances (PFAS) do not easily break down and will accumulate in the environment. These potentially harmful contaminants have been detected at firefighter-training locations including airports and aviation facilities.

Researchers at the Cooperative Research Centre for Contamination Assessment and Remediation of the Environment (CRC CARE) have used electricity to generate substances, including free radicals that are extremely strong oxidising agents. These substances strip the PFAS molecules of electrons and thus break them down into smaller, safer components.

This approach, named pfasCARE, is not limited to PFAS and can potentially be used to treat almost all organic contaminants. The oxidising agents themselves are unstable and rapidly break down into harmless compounds.

“Previous iterations of this technology, which is subject to a patent application, have required expensive materials, such as diamonds, to be effective,” said lead researcher Dr Cheng Fang, Senior Research Fellow at the University of Newcastle’s Global Centre for Environmental Remediation.

“With pfasCARE, we have been able use lead peroxide — a common, inexpensive industrial material — to dramatically cut the cost of production.”

A growing body of research has shown that PFAS can be dangerous to human health. PFOS (perfluorooctane sulfonate) and PFOA (perfluorooctanoic acid) in particular are two commonly used PFAS that are known to enter ecosystems and move up food chains, accumulating in animal and human tissue, including the liver and blood. PFAS have been linked to bladder and liver cancer, endocrine disruption, and developmental and reproductive toxicity, including neonatal mortality, and are potentially lethal to animals.

Australian authorities are recognising a growing number of sites where PFAS have contaminated groundwater, surface water and soil, in some cases spreading to residential areas. Current remediation approaches involve either removal or breakdown.

“While removal can be effective, it does not solve the problem of what to do with the hazardous chemicals, which require subsequent treatment to ensure they are not gradually released again,” said Fang.

Breakdown or mineralisation ensures that PFAS are broken down to safer substances such as carbon dioxide and fluoride. However, the innate stability of PFAS means that an enormous amount of energy is required, and this is very costly. Cheaper breakdown approaches, using chemicals, ozone or ultraviolet light to oxidise PFAS, have been largely unsuccessful or have left behind by-products that are as hazardous as the PFAS themselves.

“At this stage, pfasCARE can be used to treat contaminated wastewater or groundwater, with research underway to target contaminated soil as well. This is a world-first approach that will offer a complete clean-up solution for PFAS-contaminated sites, something that until now has not been available.”

PFAS have been used in the past to improve the ability of firefighting foam to smother fire. In such ‘aqueous film-forming foams’, or AFFFs, these chemicals have been used on fires at many thousands of emergency and training sites worldwide over the past half-century.