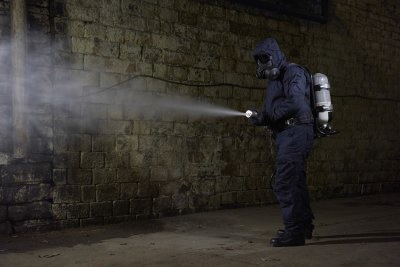 A portable airborne and surface decontamination system developed by Scott Safety is achieving what the company says is a military first — the decontamination of chemical, biological, radiological and nuclear vapours, liquids and particles simultaneously in as few as five minutes.

A manufacturer of respiratory protection for the UK Ministry of Defence, Scott Safety has developed the Light Decontamination System (LDS) which can decontaminate environments as large as 500 m3 by rapidly projecting droplets in the form of a dense and turbulent mist to reach all airborne and surface threats at the same time.

Using Scott Safety atomisation technology, the system is designed for workers to wear like a backpack (weighing 22 kg) and to deliver CBRN decontaminants to all non-line-of-sight surfaces.

The company said that this drastically reduces both the chemical footprint and time required for decontamination, and unlike traditional decontamination systems that utilise liquids, this new process forces powders to behave like a gas, which also lessens the risk of damage to sensitive and electronic equipment.

“It’s lightweight, portable, yet extremely powerful. In independent validation trials, the system decontaminated anthrax by 99.9999999% from a 100 m3 space in less than five minutes.”

The LDS typically requires only 5% of decontaminant due to the gas-like behaviour of the small droplet mist and can project a distance of up to 30 metres.

Scott Safety said for chemical and biological decontamination, the LDS is chemically agnostic, meaning it can use a range of decontaminants including delivery of alkoxides, hydrogen peroxide, hypochlorous acid, peracetic acid esters, chlorine dioxide, sodium hypochlorite and potassium peroxymonosulfate. It is also capable of delivering polymeric and high-viscosity materials suitable for radiological tie-down applications.

The system is built to handle a range of hazard management situations, including critical infrastructure, containers and underground facilities, as well as internal and external decontamination of larger military equipment such as armoured vehicles, aircraft and other transport systems.

For further information, go to www.scottsafety.com/emea.

JetBlack Safety cleaning booths are designed to reduce dust on people, their clothing and their...

The ZeoMed biohazard kits from Clean Stream Technologies are designed to provide a hygienic...

The Softwall Clean Rooms from HEMCO Coporation feature a structural framework made of aircraft...

Champagne industry to uncork big growth in next decade