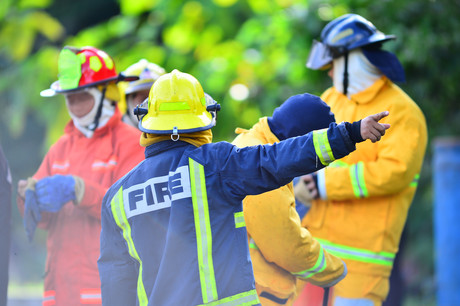 New research out of the UK finds that high-rise construction site workers are “risking their lives” by not responding immediately to evacuation alarms. One in three workers devoted more than one minute to finishing a task before heading to an emergency exit, the study found. And once the task was complete, one quarter then undertook further activities, such as collecting tools, before proceeding to an emergency exit.

“In an emergency evacuation situation, each second can make the difference between life and death,” said lead researcher Professor Ed Galea from the Fire Safety Engineering Group at the University of Greenwich. “A delayed response poses a significant risk to the health and safety of workers who might need to be evacuated due to a fire, or another on‐site emergency.”

The research was undertaken by researchers from the University of Greenwich, who also found that two out of five workers required direction from a supervisor to take action, with many believing their employers would view the completion of tasks as more important than an immediate evacuation.

Evacuation times from the buildings ranged from 9 minutes, 14 seconds to 20 minutes, 47 seconds and were dependent on factors such as where in the building people were working. The mean response time for those in the main building was 71 seconds, while those in the formworks had a response time as low as 30 seconds. Of those working in the main building, 32% took more than one minute to disengage from pre-alarm activities, while the average time for supervisors located in the formworks to disengage was 5.9 seconds, which the report suggests serves as “an example of the performance of well-trained and highly motivated staff”.

There were unexpected findings to result from the study as well. For example, evacuation response times did not appear to be influenced by the construction height, with those on higher and lower floors sharing similar response times. As Galea explained, “A worker on the 30th floor did not necessary respond to an evacuation alarm any quicker than a worker on the fourth floor.”

Questionnaires were also distributed among workers and yielded other safety-related concerns. For example, although 82% acknowledged that an evacuation alarm meant they must leave immediately, only 49% said their first action was to do so. Further, while four out of five workers said they were prompted to evacuate by the alarm, on-site video evidence suggested that 43% required supervisor intervention.

Among the researchers’ recommendations were the need to be clearer about what is meant by ‘evacuate immediately’, and that enhanced training and greater enforcement of evacuation policies is needed. “This research shows that it is essential to have robust plans in place to ensure the safe and timely evacuation of workers, and it will aid the development of improved procedures and advance the safety of people working on high-rise construction sites,” Galea said.

Martin Wilshire, Health and Safety Director at Multiplex — which took part in the study — believes the findings highlight “the importance of challenging established industry ‘norms’ and their origins in creating relevant guidance around safety during tall building construction. From our involvement in this work, we have gained a greater understanding of evacuee behaviour and the impact of access constraints such as falsework and surfaces under construction which are unique to our industry. The detail in the research will better inform our approach to risk assessments, particularly in planning for means of escape and improving behaviours in an evacuation scenario.”

The research was funded by the Institution of Occupational Safety and Health (IOSH), whose Head of Advice and Practice, Duncan Spencer, said: “The outcomes from the research will help to improve the safety of construction workers in emergency evacuation when operating in tall building construction environments, by providing a series of suggested improvements and recommendations to be followed by businesses and safety and health practitioners.”

Regarding the findings of the study, Spencer went on to remark, “From the research, it is clear that these improvements are needed considering that this is one of the most challenging scenarios, particularly given the ever-changing nature of the construction site. Response times are slow in many cases. Workers should be evacuating immediately when they hear an alarm, rather than wasting precious seconds on finishing a task. If they don’t do so, they are risking their lives because every second counts in an emergency.”

More information on the study together with further resources can be found here.