Situated in Melbourne’s Docklands, Etihad Stadium is a $460 million, multipurpose facility designed to cater for major sporting and entertainment events, as well as social, business and private functions. It has a seating capacity of 53,500 and capacity for 2000 patrons to stand. Since opening in March 2000, more than 30 million people have passed through the venue’s gates. 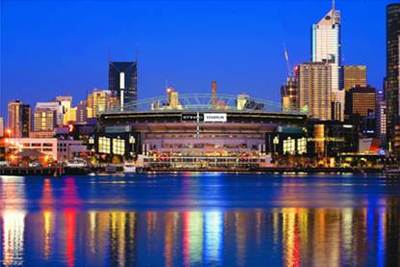 With the stadium receiving such a high level of foot traffic, emergency escape lighting is of utmost importance, and the quality and performance of the emergency lighting is critical from a safety viewpoint. This lighting is essential to ensure safe egress by building occupants when the normal lighting fails, including when this arises during a fire or other crisis situations. The lighting must provide adequate illumination and signage to allow people to avoid obstacles and move safely to the nearest exit. Its installation is prescribed by the National Construction Code and also addressed in the three parts of AS/NZ 2293.

In 2012, the stadium’s facility manager, Honeywell, considered that the exit and emergency lighting fittings at the stadium were nearing end of life and becoming more expensive to maintain as major components were requiring replacing.

As well as battery life, two other elements, namely lamp life and circuitry life, are key determinants for maintenance-free time periods. Clevertronics’ L10 range addresses all three, incorporating 100,000-hour (11-year) LEDs and enhanced circuitry design together with the latest technology in lithium iron phosphate (LFP) batteries. The maintenance-free design life of the range is claimed to be at least twice that of the current best NiCd products. Also, the batteries used in the L10 range are claimed to contain no toxic heavy metals, contaminants or carcinogens.

After a 12-month staged upgrade that was specifically focused on emergency lighting, all emergency and exit light fittings throughout Etihad Stadium were replaced with the L10 range.

Honeywell Victoria TAM Operations Manager Matthew Parisi estimates that the stadium will have ongoing annual savings of around $129,000 pa in maintenance and electricity costs as opposed to if they had maintained their previous NiCd emergency lighting fittings, with a greater yearly saving over the first seven years of operation.

Parisi said: “Through switching from NiCad fittings to the Zoneworks L10 range, we estimate that the total energy and maintenance costs will drop from $1,083,830 to $178,867 over a seven-year period, which is an 83.5% saving. The switch will also ensure an energy saving of approximately 70%, equating to a reduction in carbon dioxide emissions of 932 tonnes over the same seven-year period, which is quite remarkable.”

3D printer package up for grabs for Aussie schools

Funding for solutions to increase DER within LV networks