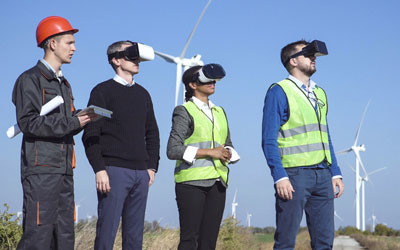 New research out of the UK suggests the use of virtual reality (VR) technology with a ‘multi-sensory’ component could be beneficial to workplace safety training outcomes — in emergency evacuation training especially. The study, titled ‘Immersive virtual worlds: Multi-sensory virtual environments for health and safety training’, was conducted by researchers in the University of Nottingham’s Human Factors Research Group, with funding from the Institution of Occupational Safety and Health (IOSH). It set out to explore whether a combination of ‘multi-sensory information’ — that is, vision and sound combined with heat and smell — could improve the safety outcomes of workplace health and safety (WHS) training initiatives. For example, on the subject of fire safety and evacuation procedures or in identifying hazardous chemicals in industrial settings.

The researchers stimulated participants’ senses — including perception of temperature, smell, sight and hearing — via an immersive VR system that was designed to assess how those involved behaved in two test evacuation scenarios, namely caused by fire and a fuel leak. In the first scenario, for example, participants used VR headsets to evacuate from a virtual fire in an office, with an added, multi-sensory dimension that added heat (via three 2 kW heaters) and smoke (from a scent diffuser) to the training exercise. Behaviour of participations within this multi-sensory virtual environment was then compared with another group that utilised audio-visual elements of VR only.

A key finding in comparing the behaviour of the two groups was greater urgency in the multi-sensory group, who were more likely to avoid the virtual fires; a finding that suggested the experience was more aligned with a real-life scenario. This reaction contrasted with the audiovisual group, who were more inclined to treat the training exercise as a game, exhibiting behaviours that were, therefore, less indicative of a real-life scenario. The significance of this finding connects within extant scholarship, which has found that human behaviour during real-world fire incidents has suggested a lack of understanding for the dangers of fire — including its spread and movement — and that people are thus often unprepared and can misjudge appropriate action. Having training programs that more closely replicate the experience of real-world hazards, therefore, allows for better preparedness and an experience of hazardous situations without the need for actual risk.

“Health and safety training can fail to motivate and engage employees and can lack relevance to real-life contexts,” the study’s lead researcher, Associate Professor Glyn Lawson, said. “Our research, which has been funded by the Institution of Occupational Safety and Health, suggests that virtual environments can help address these issues, by increasing trainees’ engagement and willingness to participate in further training. There are also business benefits associated with the use of virtual environment training, such as the ability to deliver training at or near the workplace and at a time that is convenient to the employee.”

The benefits of VR training over more traditional, PowerPoint-based training were also assessed as part of the study. Participants from these two training modules completed questionnaires that tested their knowledge in the areas of safe vehicle disassembly and fire safety procedures. These questionnaires were completed before and after training, and after one week. While those who took part in more traditional, PowerPoint training demonstrated greater knowledge immediately after the training took place, there was a significantly larger depreciation in knowledge scores of the PowerPoint group after one week, compared with the VR group: the latter of whom exhibited greater long-term retention of safety knowledge as well as reporting higher levels of engagement as well as attitude and willingness to undertake further safety training in the future.

“The wheels are turning so that virtual and smart learning is increasingly ingrained in the workplace and everyday life,” IOSH Research Manager Mary Ogungbeje said. “Technology is continuously advancing and in many cases becoming more affordable, so this study gives us a taste of what’s to come. By improving training strategies with the use of technology and stimulated sensory experiences, we are heading in a direction where the workforce will not just enjoy a more immersive and interesting training course but participate in an effective learning experience, so they are better prepared and equipped to stay safe, healthy and well at work.”

The main objective of the study, according to IOSH, “was to produce evidence-based guidance for the development and use of virtual environments in engaging and effective training using cost-effective and accessible solutions”. The researchers consulted industry as part of the study. Such consultation included discussion and visits with such partners as Rolls-Royce to gain expert advice on fire safety and the safe handling of hazardous chemicals.

The full study was released by IOSH in September 2019 and, together with further resources, can be found here.