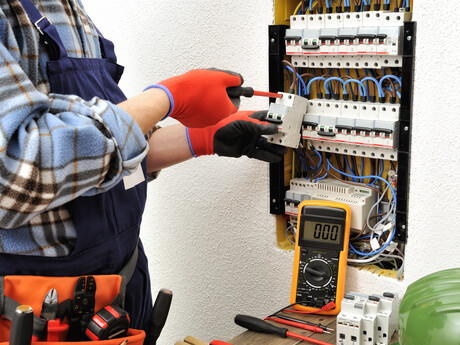 At a hearing in the Brisbane Magistrates Court, Daniel William Dawes was convicted and fined $30,000 plus court costs of $1100 for multiple offences under the Electrical Safety Act 2002 and the Electrical Safety Regulation 2013. Dawes conducted a business, trading as DD Electrical, which contracted for and performed electrical work, such as the installation of air conditioning units around Brisbane.

Between 1 November 2017 and 29 December 2017, while not holding a valid electrical contracting licence, Dawes was contracted to perform electrical work, primarily the installation of air-conditioning units at Wooloowin, Gordon Park and Ascot.

The electrical work done by Dawes to install an air-conditioning unit at a Wooloowin property in November 2017 was found to be deficient, with a number of wires attached to the air-conditioning unit cut by the defendant and re-connected by twisting the wires together and covering them in tape. The sub-standard connection had the potential to overheat, causing a fire or exposing the live wiring. Any person who came into contact with such live wiring was also at risk of electrical shock.

In sentencing, Magistrate Noel Nunan acknowledged the need for specific and general deterrence, with regard to the risks associated with improper electrical work. The Magistrate noted that Dawes had incompetently installed a number of air-conditioning units, and acknowledged that the defendant was a qualified electrician who held an electrical work licence at the relevant times and had previously held an electrical contractor’s licence.

Magistrate Nunan also considered the defendant’s lack of previous convictions and maximum penalties for the offences. Dawes was convicted on one charge of conducting a business involving the performance of electrical work without holding an electrical contractor licence, a charge of failing to comply with electrical safety duty and that failure exposing an individual to risk of death or serious injury. He was also convicted on eight charges of failing to ensure that electrical work performed on an electrical installation complied with the Wiring Rules.

An electrical company has been fined after a first-year apprentice with two months'...