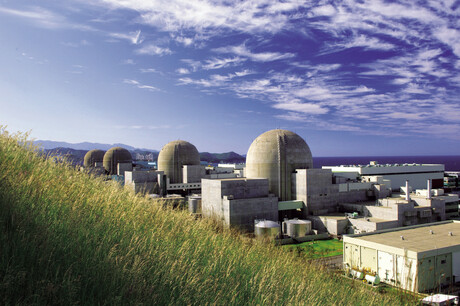 Electricity generation uptime and safety gains at the Hanul nuclear plant in South Korea are receiving international recognition for the fast-actuation, quick-release CamNut system from Australian precision engineering company Technofast. The successful use of the system at the nuclear power plant in South Korea — with an installed 6157 MW capacity in two stages — has been complemented by their use at the country’s Wolsong, Shin Wolsong and Hanbit nuclear plants and at major steam turbine plants as well. The ongoing work at the Korean fleet of nuclear power generation plants has won Technofast accreditation as a supplier to the country’s nuclear industry, having attained certification to design and manufacture equipment for this sector.

John Bucknell, Technofast Founder and CEO, stated that the time savings and safety gains proven in these installations apply to all power generation applications, including nuclear, fossil, hydro and green generation. Bucknell added that they offer the same benefits to all industrial applications where workers need to ensure equipment uptime while avoiding exposure to hazardous situations, including radiation, heat, fuel, pressure and the need to work in confined spaces where clumsier, time-consuming fastening tools are not recommended. “Attaining certification from a world leader in terms of nuclear electricity generation opens the door to global applications for the CamNut and complementary EziTite systems in nuclear and electricity plants of all types,” Bucknell said.

The Technofast hydraulic CamNut system and complementary EziTite hydraulic bolts and specialist complementary products enable entire groups of fasteners to be torqued or released immediately or simultaneously, rather than being individually installed and released. CamNuts can also be used where thread length above the nut is insufficient to apply normal Bolt Tensioners, meaning users do not need to replace expensive studs to gain the benefits of hydraulic direct tensioning. The unique stepped base washer provides a firm reaction point for tensioning without altering spotface diameters on turbine casings. Also, bolts are not subject to thermally induced stresses from rapid and uneven heating, which is important to longevity, reliability and safety.

Equipment decommissioning, maintenance and installation for regular service operations are also reduced, carving days off the maintenance schedules of the Korean power station applications, according to Bucknell. “This means big gains for every hour sooner that equipment can be brought back online to produce generating revenue. Days can mean millions of dollars in generation industries — and the CamNut and EziTite systems offer better risk management, by getting people in and out of machinery quicker, which is a major plus in industries such as oil and gas, mining and energy, manufacturing and processing,” Bucknell said.

The savings at the original Korean nuclear and fossil electricity applications have been proven over more than a decade, with multiple new applications following their success. The CamNut system and its complementary products are used in major areas of the Korean Nuclear generators, including the Combined Reheat Valve (CRV – CamNut – 1.75in), Main Stop Valve (MSV – CamNut 2.5in), Control Valve (CV – CamNut 3in), High-pressure control valve and stop valve (CamNut) and Venturi (EziTite Hydraulic Nut 3in). CamNuts are applied by being placed on bolt studs and then hydraulically actuated, stretching the bolt to the precise tension required and then locking it in place mechanically with a locking device. The reverse procedure enables rapid disassembly when it is eventually required for annual or ad hoc maintenance. The fast and secure hydraulic fastening system uses hydraulic force to draw and release the bolt, rather than each fastener being locked or loosened individually by operations staff using wrenches to torque the bolt by rotating it on the thread or using heat processes. 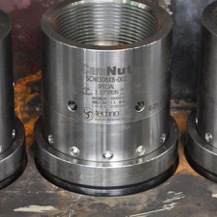 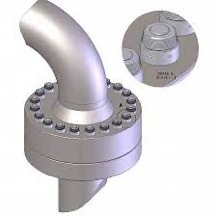 CamNut, top, and multiple installation graphic, bottom. Normally, a bolt tensioning tool pulls on the bolt threads protruding above the regular hex nut, which is then screwed down to retain the loads induced by hydraulic operation of the tool. With no available thread, the CamNut performs as the connection to the bolt for the operation. Its integral collar expands to take up the bolt’s elongation under force and retains the load when the hydraulic charging pressure is released. Watch a video of the CamNut in operation here. Image credit: Technofast Industries

CamNuts’ direct extension methods avoid thermal stress and heat deterioration of bolts. Applied onto existing fasteners, the CamNuts operate simultaneously to reduce downtime and extend the lifespan of metal no longer subjected to thermal stress caused by rapid uneven heating. Alongside reducing the safety hazards associated with more laborious maintenance methods, CamNut and EziTite fasteners optimise long-term safety by ensuring even tensioning across a range of bolts, where tensioning precision is vital to long-term performance. Accurate and even loads on the flange/join enhance the ongoing reliability of the machinery in service.

The CamNuts are designed for extreme situations and adverse conditions, with modular construction to reduce overall tool weight. Using CamNuts with direct tension can improve safety, as they are fast to fit and remove. The CamNuts require little physical effort and are user friendly. The CamNuts minimise costs by reducing downtime, thereby optimising profitable uptime. They also provide the benefits of hydraulic tensioning without changing expensive bolts. The CamNuts increase bolt load accuracy, eliminate thread galling, and increase the life of the hardware, with no hardware modification necessary. The CamNuts also provide reliable and precise tensioning, and remove the risk of strike and pinch point injuries caused by other tightening methods.

The Stanilite emergency and exit lighting range is engineered to a modular design format, to...

Nurses to convene on Darwin for national conference