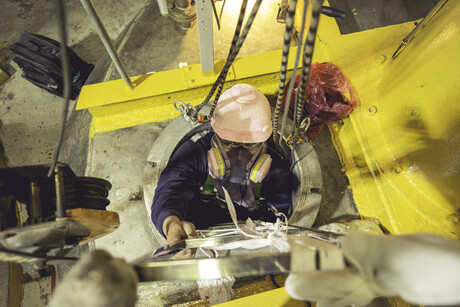 The incident occurred in May 2019, when a third-year apprentice and another worker entered an ISO tank, which had been used to hold diesel, to undertake refurbishment works. An oxygen acetylene torch was used to cut into the tank’s internal walls and within minutes the air became smoky and dark. Later, as work continued, flames were noticed on the floor. One worker was able to climb a ladder to escape the tank, but the apprentice fell, hitting his elbow and sliding to the bottom. The other worker then helped pull the apprentice out by his arm.

The company failed to notify WorkSafe Victoria of the incident. However, inspectors visited the workplace the following month after an anonymous tip-off. The inspectors found that a company policy for entering confined spaces and rescue plans was still under development, with inadequate instruction and training for working in confined spaces. WorkSafe Executive Director of Health and Safety Dr Narelle Beer said the dangers of working in confined spaces were well known and there were no excuses for employers who failed to control the risks.

“Poor ventilation, toxic gases and fire are just some of the risks that can be faced when undertaking this kind of work. Employers and supervisors have to be on high alert when it comes to the safety of their workers in confined spaces and clear and comprehensive procedures and proper training and instruction need to be provided,” Dr Beer said.

To control the risks of working in confined spaces, employers are advised to consider whether the work can be done another way without entering the confined space, such as by providing outlets and facilities for cleaning to eliminate the need for entry. Employers should also test the atmosphere to quantify the level of oxygen, atmospheric contaminants and any flammable gas or vapour present in the space, to determine appropriate risk controls. WorkSafe also advises employers to ensure that employees do not enter a confined space unless they have been issued with an entry permit for the space, with a stand-by person watching the work from outside the space.

Entry and exit procedures should be established for the confined space, along with emergency procedures. These should also be communicated to employees, with signs on or near any confined space and at each entry point, to warn that only people who have been properly trained and have an entry permit may enter. Appropriate respiratory protective equipment (air-supplied or air purifying) should also be used where required. Employers must also provide employees with enough information, instruction and training to do their work safely and without risks to health.

The Mining and Energy Union has requested a prosecution against labour hire company Mastermyne,...