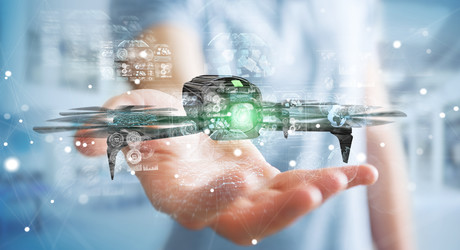 Inspections in confined spaces have always posed a significant challenge for industries and they often come at significant cost, but a solution could come from an unlikely source — a drone.

Confined space inspections can be slow, dangerous and costly. When human entry is involved, some of the risks and challenges include:

While surface-mounted robotic devices (crawlers, climbers and tractor cameras) are generally seen as the way of the future for confined space inspections in industries such as power generation, oil and gas, water management, brewing, chemical, facilities, construction and shipping, the development of specially designed unmanned aerial vehicles (UAVs) opens up a whole new avenue of thought.

Don’t drones need open spaces? Don’t they crash if they collide with something? What about turbulence inside the space? Dust or hazardous gases? Doesn’t the operator have to maintain visual contact with the drone? What about maintaining signal transmission? Wouldn’t reflective surfaces inside the spaces have a negative impact on the quality of images or video collected?

The concept of a drone flying deep into the recesses of confined spaces where there’s no light and probably complex internal geometry seems like fantasy, but it is, in fact, a reality.

Applications include boilers, sewers, tanks, stacks, ducts, sumps and culverts with a diversity of industries from mining and civil to maritime and mining standing to benefit from this rapidly evolving technology.

A key advantage of the Elios drone is its use of gyroscope technology to enable it to manoeuvre around and inspect complex geometries without causing any damage to the sensors or any other component part. A carbon fibre decoupling system between the drone itself and the outer cage creates a protective ‘ball’ which renders the device collision-tolerant in flight.

Other advantages of drones for confined space inspections include:

While there is still a way to go, there are several drone options already on the market which are being used successfully for confined space inspections. These devices are getting ‘cleverer’ all the time and many experts believe that the technology could ultimately be the most popular solution for unmanned entry into hazardous confined spaces.

The MGS-402 dual-channel gas detection controller from Bacharach is designed for refrigerant,...

Fanquip portable blower extractors are designed to be used for a range of applications that...

The potential of androgens in breast cancer treatment