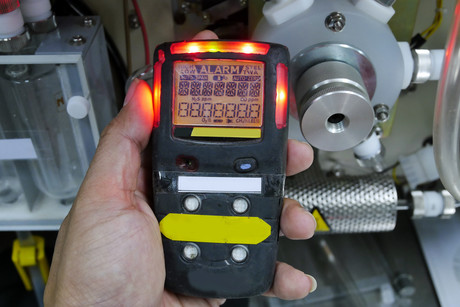 How important is it to check your gas detection device?

According to NIOSH, atmospheric hazards account for 40% of the deaths in confined spaces.

OSHA found that oxygen deficiency or gas poisoning accounted for a similar percentage of deaths in industry. OSHA stated that asphyxiation was the main hazard in confined spaces, and that atmospheric hazards were the leading cause of death.

Individuals still take their life in their own hands by not taking the small amount of time and cost to properly check their gas detection device prior to entering hazardous environments.

Dirt, dust and water impact. These physical effects can block gases and vapours from entering the sensor chamber preventing detection of the gases. This can be either within the sensor area, sampling pump or sample lines.

Dropping and other abuse can prevent the instrument from working properly or alter the ability of the detector to measure accurately.

High gas exposure will change the calibration curve of the sensors, causing false or inaccurate readings. Extremely high concentrations can kill the sensor’s ability to measure gas. Many sensors can fail but not provide a warning that they have failed. In fact, many provide a zero indication on the meter reading, which suggests they are working correctly when they are not.

In this case sensors can be poisoned by other gases which are adsorbed into the sensor chamber and react with the electrode catalyst.

Storing instruments in an environment which is either too cold or too hot can affect the ability of the sensors to measure accurately.

All sensors from all manufacturers drift over time. Calibration brings the sensor back into equilibrium and provides accurate readings.

How do I make sure my sensors work?

A: Yes, testing your gas detection instrument with test gas is the only way to ensure the gas detection device is working correctly and that you can be confident it will measure the atmosphere you are working in.

How do I test my gas detection instrument?

Here are the terms used in the industry for ways of testing your gas detection instrument:

The above terms are used by the gas detection industry globally, but the definitions of these terms are inconsistent. In fact, the term ‘bump testing’ can be defined differently from one person to the next. This is a major cause for concern as it creates confusion. Here we will define calibration, verification and bump testing and note when the other terms are used.

Verification is the process of determining whether the instrument is still accurate and is within accuracy requirements for all sensors. The process does not make any instrument adjustments but rather compares the instrument response to a known concentration of test gas over a specific length of time.

Provided the response reaches a satisfactory level relative to the test gas (+/-) then the instrument is considered accurate and is ready for use. The customer would determine what level of accuracy was acceptable (example +/- 10%). Typically, this would take 90+ seconds depending upon sensor type.

Should the sensor fail to respond to a satisfactory level then the instrument should be taken out of service and sent for calibration. The terms function test, functional bump test or response test are often used for this process. AS/NZS 60079 uses the term ‘response check’ to describe this test.

The more accurate you want your instrument the more often you will calibrate it. Issues affecting sensor performance noted above will also determine frequency of calibration. Your application should determine calibration frequency.

Calibration requires adjustment of the instrument either manually or automatically and therefore should be limited to those with appropriate training or via pre-programmed calibration systems.

The term bump testing is now used globally but is defined differently by many users which can cause confusion. It is important that all employees are clear on what is required when using the term ‘bump testing’ in order to prevent miscommunication and misunderstanding in the workplace which could lead to a fatality.

Q: How often should I bump test?

A: Prior to every use.

All gas detection devices must be calibrated regularly, and function/response tested prior to use for maximum accuracy and safety.