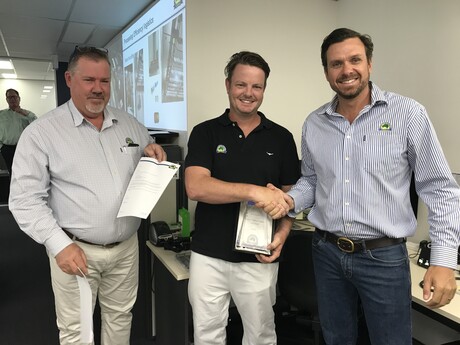 Meanwhile, the Babbiloora staff and their manager Kelvin Webber were recognised for their willingness to communicate readily about safety incidents. “They’re not afraid to communicate to the group; it’s great to see their efforts,” Porter said.

Wade Hinchcliffe was named winner of the processing efficiency and logistics award with his proposal to fit stop–go lights as visual gate controls. Porter said that Hinchcliffe is “one of the most proactive people we have” who tries to reduce the number of incidents in the factory. An ergonomic hinged sample scoop to take grain samples received the engineering innovation award for the feedmill crew at Brindley Park. “They have to take grain samples at foot level, 20 times a day, so they created the new scoop; they made it themselves onsite. It was a great innovation,” Porter said.

The safety awards attracted entries from across all ACC operations. Delainey Jenkins received an honourable mention for the concave mirror, designed to avoid collisions in a narrow hallway, as did Ricky Gunn for knife kits and traffic management changes in a knife room. Honourable mentions also went to Mabel Wiki, for overhauling lockers and gumboots and for her leadership, and to Wayne Shelton and Rowan Sanders, for their communication and commitment to safety. Phillip Brown, Jeffrey Pearce and Malcolm Hanley also received an honourable mention for mentoring staff — especially new starters — on knife safety and general safety.

The Bright Ideas safety awards were presented on the last day of National Work Safety Month and saw numerous activities undertaken by ACC, including a new spinal health initiative and a safety walk-through of the plant by all senior executive managers. Porter said that the success of the month-long safety campaign will see it repeated next year.

Australian Country Choice is among Australia’s largest vertically integrated, family-owned beef and cattle businesses, operating across 1.75 million hectares in Queensland, with a processing plant at Cannon Hill in Brisbane.

Inspectors from SafeWork NSW will be visiting worksites across the state to increase safety and...

A truck driver has been ordered to pay more than $50,000 after he was discovered to be secretly...

The South Australian Government has released an independent review into the practices and...