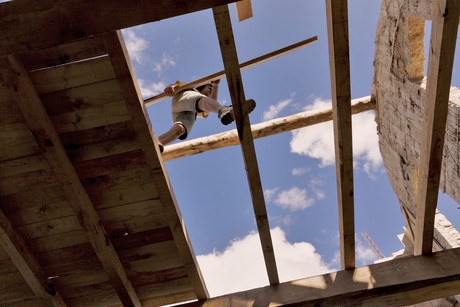 A Queensland homebuilder has been fined $77,200 and ordered to pay almost $1800 in costs following seven breaches of the Work Health and Safety Act, dating back to 2017. Three complaints and seven charges were laid against the homebuilder after Workplace Health and Safety Queensland (WHS Queensland) inspectors discovered uncontrolled fall from height risks at two worksites in Annerley and Greenslopes.

WHS Queensland said the first two complaints came after an inspector found unbarricaded voids and edges on upper level work decks, along with inadequately maintained scaffolding and inadequate worker access and egress across both sites in October 2017 — with the inspector issuing four improvement notices for the builder to remedy the risks. The third complaint came after a February 2018 visit to the Annerley site revealed labourers were again working from an upper level balcony without edge protection in place.

The defendant company was the builder responsible for the work and had control of the sites. Fortunately, no-one was injured as a result of the breaches, WHS Queensland said. Magistrate Elizabeth Hall, who presided over the proceedings, said the offences were serious and the homebuilder had failed to adequately address the obvious hazards while allowing employees to continue working.

She considered the total $77,200 penalty substantial, given that the company was only a small operation, WHS Queensland said. While no conviction was recorded, the company was convicted in Brisbane Magistrates’ Court and penalised for: three breaches of section 33 of its duty held under section 20, relating to person management and workplace control, as well as four breaches of section 193 for failing to comply with improvement notices.

A Victorian man caught working while receiving payments from workers compensation after he...

Funding for small-scale and craft producers in Vic