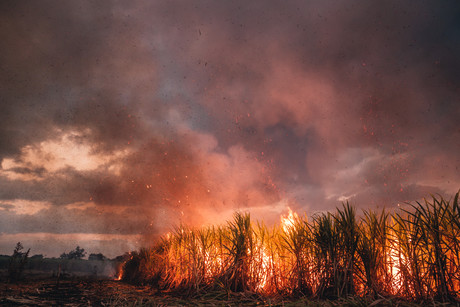 A sugar cane harvester has been fined $35,000 and ordered to pay $1596.15 in costs after a cane burning incident left a worker with severe burns requiring multiple skin grafts and psychological injuries. The contract harvester pleaded guilty to failing to meet his work health and safety duties under section 32 of the Work Health and Safety Act 2011 in Ayr Magistrates Court, according to Workplace Health and Safety (WHS) Queensland.

The court heard that on 19 August 2017, three workers, including the injured worker, were conducting a controlled burn at a Jarvisfield sugar cane farm — a practice that helps simplify the harvesting process by removing the cane ‘trash’, including the straw, cane tops and green and dry leaves, while leaving the stalks. The defendant was providing sugar cane harvesting services to the property owners at the time.

About half the remaining crop had been harvested without burning — creating a ‘trash blanket’ on the ground, which could be burned or left to decompose, WHS Queensland said, adding that, while pre-harvest cane burning is common in Burdekin, most growing regions no longer practise it. The Office of the Work Health and Safety Prosecutor told the courts that fires were lit among the standing cane and the trash field when the injured worker noticed the wind had changed and was concerned he was trapped.

While attempting to run out of the burning field, he tripped and fell, receiving burns to the exposed skin on his face, hands and legs. Fortunately, he was able to make his way out of the burning trash onto the grass at the edge of the paddock; however, he still required multiple skin grafts and laser surgery on his thumbs to regain full movement. The court heard that lighting the trash blanket while the injured worker was lighting the standing cane, as well as his location between the fields, created a risk of being trapped between the two fire fronts, which ultimately led to his injuries. None of the workers were wearing fire-retardant clothing, nor were they equipped with two-way radios or any other form of communication.

The magistrate found the possible consequences of the two fires — the standing sugar cane and the trash blanket fire — were clearly death or serious injury, WHS Queensland said. The probability of such a consequence was obvious and not remote, when methods to prevent or minimise the incident were readily available and included using two-way radios, protective clothing and simple procedures to coordinate the two fires. The defendant had been a sugar cane farmer for more than 45 years and had not had a similar incident in that time. He was fined and no conviction was recorded.