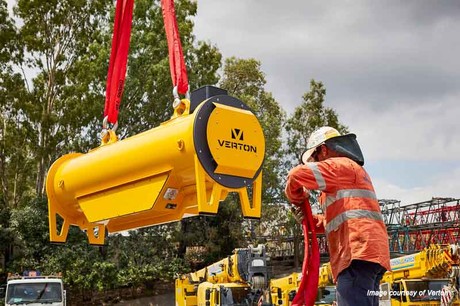 An electromechanical load-management system that aims to reduce crane-related fatalities and injuries has been named Best in Class in Engineering Design at the 2019 Good Design Awards.

The ‘R-Series’ system, created by Verton, contains remote-controlled, gyroscopic, scalable modules which allow operators to control and manipulate suspended loads, weighing up to 20 tonnes, from a distance, in real time.

It’s designed to replace tag-lines and remove the need for operators to work in close proximity to the pickup and landing sites, so that they will no longer be near or under moving loads at risk of serious or fatal injury, according to Verton.

It also aims to prevent suspended incidents — which can cause damage to buildings, equipment and infrastructure — and improve worksite operations and planning.

The R-Series has sensors and telemetry which can interpret real-time load movement and automatically orient the load to a desired position, as well as GPS capabilities that help it lift loads from, and deliver them to, specific coordinates.

It can also reduce load-move time by up to 25% and provides a 50% reduction in hook time, resulting in up to an hour of reduced cycle time over a standard work day, Verton claimed.