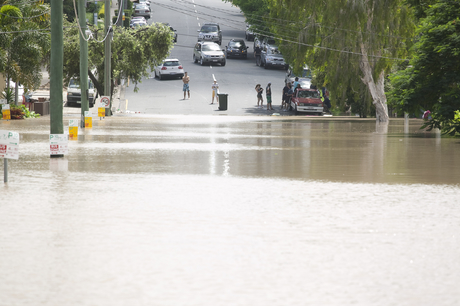 In research published in the journal Geophysical Research Letters, Professor Ashish Sharma and Conrad Wasko analysed data from 1300 rain gauges and 1700 temperature stations across Australia to see how air temperature affected the intensity and spatial organisation of storms. They found that atmospheric moisture was more concentrated near the storm’s centre in warm storms than in cooler ones, resulting in more intense peak rainfalls in those areas.

“As warming proceeds, storms are shrinking in space and in time,” explained Wasko. “They are becoming more concentrated over a smaller area, and the rainfall is coming down more plentifully and with more intensity over a shorter period of time. When the storm shrinks to that extent, you have a huge amount of rain coming down over a smaller area.”

Wasko said scientists have long suspected that the intensity of rainfall would be boosted by climate change, as the warming air raises the carrying capacity of moisture. But while extreme rainfall has been rising, little was known about the mechanisms causing it. The study shows that storms are changing in spatial terms.

This Australian data has global implications, added Professor Sharma, as Australia is a continent that “spans almost all the climate zones in the world — Mediterranean, tropical, temperate, subtropical — everything except the Arctic or Antarctic. So the results hold a lot of value — the pattern is repeating itself over and over, around Australia and around the world.

The Climate Council also commented on the recent weather conditions saying coastal flooding events had tripled in Sydney in the twentieth century, and on present levels of climate change, today’s 1-in-100-year flood will occur every day or so by 2100.

According to the council, these storm surges are now riding in on a sea level that is much higher than it was before climate change really started to take hold, while more intense rainfall and higher sea levels have combined and are making these kinds of storms more damaging.

Climate Council CEO Amanda McKenzie said the storms on the east coast highlighted why cuts to the CSIRO would damage Australia’s ability to understand, respond to and plan for a changing climate.

“Flights this week have been thrown into chaos by the flooding at Sydney Airport,” she said. “We now live in a new and changing climate. Research is critical to ensure that we can prepare for the future, particularly our emergency and health services who are first responders to these types of events.

“If we don’t tackle climate change then more than $226 billion in commercial, industrial, road, rail and residential assets in Australia are at risk from rising sea levels.”

Governments and business rely on climate science to make billion-dollar decisions and without it, added McKenzie, they will be relying on guesswork.

The 2021 WorkSafe Awards have recognised workers, businesses, and health and safety...