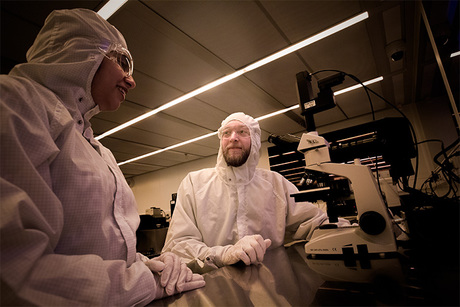 These transparent, flexible electronics - which can be worn as skin patches or incorporated into clothing - are bringing science fiction gadgets closer to real life.

Dr Madhu Bhaskaran, project leader and co-leader of the RMIT Functional Materials and Microsystems Research Group, said the sensors can be placed on work and safety gear to detect dangerous gases.

“Hydrogen leaks can lead to explosions as happened with the Hindenburg disaster and nitrogen dioxide is a major contributor to smog,” she said.

“The ability to monitor such gases in production facilities and coal-fired power stations gives vital early warning of explosions, while the ability to sense nitrogen dioxide allows for a constant monitoring of pollution levels in crowded cities.”

Much like a nicotine patch, they can be worn on the skin. In future, they will be able to link to electronic devices to continuously monitor UV levels and alert the user when radiation hits harmful levels.

Gutruf said the research used zinc oxide - present in most sunscreens as a fine powder mixed into a lotion - as the UV sensing material.

Zinc oxide was used in the form of very thin coatings over a hundred times thinner than a sheet of paper.

“This thin zinc oxide layer is engineered with a plate-like structure that we call micro-tectonics, these plates can slide across each other a bit like geological plates that form the earth’s crust  allowing for high sensitivity and the ability to bend and flex the devices,” he said.

Dr Bhaskaran said the sensors are cheap and durable - attributes which will see flexible electronics and sensors become an integral part of everyday life.

The research, which has just been published in micro/nano-science journal Small, was supported by the Australian Research Council.

Australians unprepared for digital and telehealth