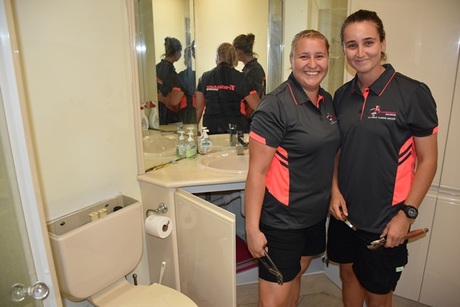 When Helen Yost expressed an interest in learning plumbing as a trade, she was told by a male boss “girls don’t plumb” — but that hasn’t stopped her.

Yost, 28, has now been working in the plumbing industry for six years and is the co-creater of Tradettes, an all-female plumbing team that has been busy clearing pipes and solving plumbing issues around Brisbane since 2013.

“I first got interested in plumbing when I was an office manager at a plumbing business and went on-site and saw what the blokes were doing and I thought I would really like that hands-on, practical work and would enjoy the physicality of it,” said Yost.

“It was like building a Meccano set! I loved the problem-solving aspect, so asked my boss if he’d give me a go at an apprenticeship.

“When he said that women couldn’t be plumbers, that really put the fire in my belly to prove him wrong and I am sure he is eating his words now.”

The issue of opportunity and wage disparities for females in the workplace, especially in male-dominated industries, has been a hot topic this week as International Women’s Day was celebrated around the world on Tuesday 8 March.

Tradettes currently has two apprentices training at TAFE Queensland SkillsTech, including Eilish Grundon, 21, a second-year plumbing apprentice who moved to Brisbane searching for more opportunities in her chosen plumbing trade.

“I went to an all-girl Catholic school in a small town and tried to go to university after finishing Year 12, but it just did not hold any interest,” said Grundon.

“My advice to women considering a trade is to definitely do some work experience to see if it is going to suit you. It’s not for everyone, but I love it.”

A spokesperson for TAFE Queensland SkillsTech said that of the 85,000 apprenticeships that were started across Australia in the last year in trade and technical careers, only 15.3% were females.

While women have made up at least 50% of professional occupations since the mid-2000s, only 2% in the last 25 years have entered the construction, automotive and electrotechnology trades.*

“We still have a way to go, but slowly and surely every year, women are choosing a trade career and going on to open small businesses in their trade area or on to larger companies,” said the spokesperson.

For more information on TAFE Queensland SkillsTech courses, call 1800 654 447 or go to tafeskillstech.edu.au.

A Victorian train and rail manufacturer has been fined $20,000 after a worker was crushed while...

A 64-year-old man has died in Victoria while unloading gravel from a truck trailer. This brings...

Workplace Health and Safety Queensland has issued a safety alert for the agricultural industry...

How IoT-enabled chemical systems can help with cleaning staff retentions

The anatomy of a decarbonised building

Where does real interoperability start?

Force measurement for efficiency in food processing and packaging

The importance of leak test food packaging to waste reduction